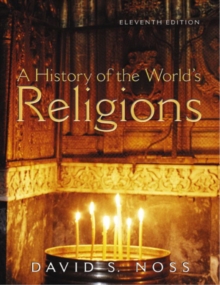 A HISTORY OF THE WORLD'S RELIGIONS

Product Description This book is the most thorough, yet concise history of world religions available in a single volume, discussing many subjects largely neglected in other book. A four-part organization covers: Some Primal and Bygone Religions, The Religions of South Asia, The Religions of East Asia, and The Religions of the Middle East. For individuals interested in bridging the gap between the foundings of religions and their present state?and their role in today's word of international conflicts. From the Back Cover Refined by over forty years of dialogue and correspondence with religious experts and practitioners around the world, Noss's A History of the World's Religions is widely regarded as the hallmark of scholarship, fairness, and accuracy in its field. It is also the most thorough yet manageable history of world religion available in a single volume, treating many subjects largely neglected in other texts. The book's depth, breadth, and, organization free instructors from having to "cover" everything in lectures, enabling them to select specific assignments and use class time for questions, discussion, and their own favorite materials. NEW TO THE ELEVENTH EDITION! Updated coverage on Islam?In central Africa, Iran, Indonesia, Pakistan, Afghanistan, and Southeast Asia. New material on quasi-religious movements?Includes the Wahhabi-derived agencies of terrorism in the Islamic world; the Falun Gong in China; and "spirituality" on the American scene. Enhanced interior design, including new categories of illustrations and generous, color-highlighted primary source materials throughout?integrates a wealth of original short passages quoted from sacred texts and accompanied by explanatory comments. STANDARD CONTENT AND PEDAGOGIC FEATURES OF A HISTORY OF THE WORLD'S RELIGIONS Comprehensive, in-depth coverage in concise presentation, offering the most detailed treatment of world religions available in a single-volume text. Demonstrates historical influences of religions on social, political, and ethical arenas. Updates material on the contemporary relevance of world religions. Attention to differing varieties of Islamic fundamentalism. Appropriate attention to female divinities and the role of women. Includes complete chapter on Zoroastrianism, often absent in other texts. Detailed table of contents and extensive subheads. In-text highlighted terms which are keyed to chapter-end glossaries. Brief boxed quotations. Special color inserts to highlight key quotations. Comprehensive index and current list of further readings. FROM THE PREFACE: "My elder brother, John B. Noss, spent ten years preparing the first edition of this book (published in 1949). His preface to the first edition spoke of two special needs to be met: to include descriptive and interpretative details from the original source materials, and to bridge the interval between the founding of religions and their present state ....The study of world religions needs to encompass the immediate and the existential as well as the rational; the empathic as well as the analytical. Serving as the editor of John's book has been, on the one hand, a challenge to emend each inaccuracy and enhance each strength, but also a profound experience of what it is like to look out on the world through the eyes of a wise person." ? DAVID S. NOSS Excerpt. Â© Reprinted by permission. All rights reserved. Just as the Nazi Holocaust incinerated naive assumptions about human nature and historical progress, so the flaming collapse of the World Trade Center in 2001 shattered assumptions about status quo, religion, and peace. Those of us who inquire into the history of the world's religions soon become aware that from the perspective of some of the religions the study of history is bound to be fruitless. Religions are about "what matters most" and to some that means transcending the temporal and in effect abandoning the search for meaning in the historical scene. Picking up a book like this may sig