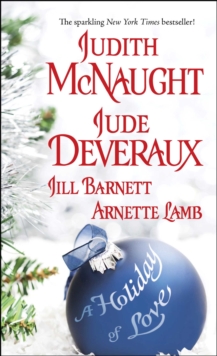 A HOLIDAY OF LOVE

Product Description When the weather outside is frightful, what better way to warm up than with four magnificent tales of love and adventure? Slip into a bubble bath or curl up in front of a roaring fire--and let New York Times bestselling romance authors Jude Deveraux, Judith McNaught, Jill Barnett, and Arnette LambÂ Â whisk you away! In New York City in the late 1800s, a beautiful but clumsy angel turns a lonely man's life around...In medieval Scotland, the intrigues of a Christmas Mass imperil two Highland lovers...In Regency London, a world-weary lord receives an outrageous proposal...In modern-day Colorado, a daring and clever twelve-year-old plays matchmaker for his bighearted but impractical mother... Filled with drama, adventure, and sizzling romance, A Holiday of Love will transport you to a world where love always reigns supreme! About the Author Jude Deveraux is the author of more than forty New York Times bestsellers, including Moonlight in the Morning, The Scent of Jasmine, Scarlet Nights, Days of Gold, Lavender Morning, Return to Summerhouse, and Secrets. To date, there are more than sixty million copies of her books in print worldwide. To learn more, visit JudeDeveraux.com. Jill Barnett is the New York Times bestselling author of fifteen acclaimed novels and short stories. There are more than five million copies of her books in print in seventeen languages. Judith McNaught is the New York Times bestselling author who first soared to stardom with her stunning bestseller Whitney, My Love. There are more than thirty million copies of her books in print. She lives in Houston. Arnette Lamb (1947-1998) was theÂ  New York TimesÂ bestselling author ofÂ  Chieftain, Border Lord, and other historical romance novels. She won multiple awards for her writing, including theÂ  Romantic TimesÂ Best New Historical Author award. Excerpt. Â© Reprinted by permission. All rights reserved. Chapter 1 from "Change of Heart" by Jude Deveraux in A Holiday of Love The man behind the desk looked at the boy across from him with a mixture of envy and admiration. Only twelve years old, yet the lad had a brain that people would kill to have. I mustn't appear too eager, he thought. Must keep calm. We want him at Princeton -- preferably chained to a computer and not allowed out for meals. Ostensibly, he had been sent to Denver to interview several scholarship candidates, but the truth was, this boy was the only one who the admissions office was truly interested in, and the meeting had been set to the boy's convenience. The department dean had arranged with an old friend to borrow office space that was in a part of town close to the boy's very middle-class house so he could get there by bike. "Ah hem," he said, clearing his throat and frowning at the papers. He deepened his voice. Better not let the kid know that he was only twenty-five and that if he messed up this assignment he could be in serious trouble with his advisers. "You are quite young," the man said, trying to sound as old as possible, "and there will be difficulties, but I think we can handle your special circumstances. Princeton likes to help the young people of America. And -- " "What kind of equipment do you have? What will I have to work with? There are other schools making me offers." As the man looked at the boy, he thought someone should have strangled him in his crib. Ungrateful little -- "I'm sure that you'll find what we have adequate, and if we do not have everything you need we can make it available." The boy was tall for his age but thin, as though he were growing too fast for his weight to catch up with him. For all that he had one of the great brains of the century, he looked like something out of Tom Sawyer: sandy hair that no comb could tame, freckles across skin that would never tan, dark blue eyes behind glasses big enough to be used as a windshield on a Mack truck. Elijah J. Harcourt, the file said. IQ over 200. Had made much progress on coming up with