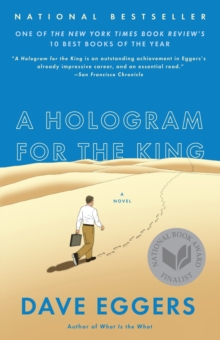 A HOLOGRAM FOR THE KING: A NOVEL

Product Description A Hologram for the King takes us around the world to show how one man fights to hold himself and his splintering family together in the face of the global economyâ€™s gale-force winds. In a rising Saudi Arabian city, far from weary, recession-scarred America, a struggling businessman pursues a last-ditch attempt to stave off foreclosure, pay his daughterâ€™s college tuition, and finally do something great.Â This taut, richly layered, and elegiac novel is a powerful evocation of our contemporary moment â€” and a moving story of how we got here. A National Book Award FinalistOne of theÂ New York Times Book Review's 10 Best Books of the Year One of the Best Books of the Year fromÂ The Boston GlobeÂ andÂ San Francisco Chronicle Review â€œ A Hologram for the King is an outstanding achievement in Eggersâ€™s already impressive career, and an essential read.â€ â€” San Francisco Chronicle â€œ[A] clear, supremely readable parable of America in the global economy that is haunting, beautifully shaped, and sad. . . . A story human enough to draw bloodâ€¦. Groundbreaking.â€ â€” The New York Times Book Review â€œCompletely engrossing. . . . Perfect.â€ â€” Fortune Â  "Dave Eggers is a prince among men. . . . A strike against the current state of global economic injustice." â€” Vanity Fair Â  â€œA fascinating novel.â€ â€” The New Yorker Â  â€œEerie, suspenseful and tightly controlled.â€ â€” The Globe and Mail Â  â€œA comic but deeply affecting tale about one man's travails that also provides a bright, digital snapshot of our times.â€ â€” The New York Times Â  â€œEggersâ€™s most fully-realized character to date. . . . True genius.â€ â€” Boston Globe Â  â€œAn unforgettable read.â€ â€” Entertainment Weekly â€œA novel poised on the central meridian of our times. . . . Eggers maintains an exquisite balance of irony, empathy, dark humor, and unexpected tenderness in this taut exploration of the ever-increasing price of ordinary survival. A book as heartbreaking as the global economy it explores with such beauty and ferocity.â€ â€”National Book Awards citation Â  â€œEggers, continuing the worldly outlook that informed his recent books Zeitoun and What Is the What, spins this spare storyâ€”a globalized Death of a Salesmanâ€”into a tightly controlled parable of Americaâ€™s international standing and a riff on middle-class decline that approaches Beckett in its absurdist despair.â€ â€” The New York Times citation for Best Books of the Year Â  â€œSolidly constructed and elegantly told. There is nothing inaccessible about it. . . . Clay may not be like each of us, but he is an everyman whose irrelevancy is parallel to Americaâ€™s own.â€ â€” Los Angeles Times Â  â€œEggers understands the pressures of American downward-mobility, and in the protagonist of his novel, Alan Clay, has created an Everyman, a post-modern Willy Loman. . . . The novel operates on a grand and global scale, but it also is intimate.â€ â€” The Chicago Tribune Â  â€œFascinating. . . . A Hologram for the King, as far from home as it might seem, is an acute slice of American life.â€ â€” Tampa Bay Times Â  â€œA fresh surprise. . . . Strong and satisfying. As the kingless days pass, Alan ventures from the tent and hotel into the rich, unsettling realities of the Kingdom, and Eggers ventures deeper into Alan, as well as into the question that has seemingly guided Eggersâ€™ work for years: What does it mean to be an American in a world that has places like the Sudan, Saudi Arabia, or post-Katrina New Orleans?â€ â€” San Francisco Weekly Â  â€œDeft and darkly comic . . . A Hologram for the King is not only a portrait of a man in midlife trying desperately to salvage his future. The book is emblematic of what Eggers sees as wrong in America today: the collapse of homegrown industry, the outsourcing of labor, a loss of confidence, soured ideals. . . . But [it] isnâ€™t a bummerâ€”or if it is, itâ€™s a bummer beautifully enlivened by oddball encounters and oddball characters, by stranger-in-a-strange-land episodes. . . . A Hologram for the King moves forwardâ€”a