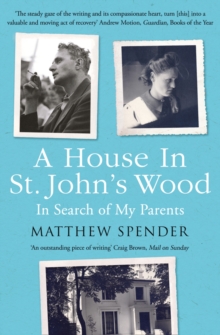 A HOUSE IN ST JOHN'S WOOD: IN SEARCH OF MY PARENTS

Stephen Spender's life, with all its secrets, successes, and contradictions, is a vivid prism through which to view the twentieth century. He befriended Auden and Isherwood while at Oxford, and together the three had wildly transgressive adventures in Europe and were early vocal critics of Hitler and the rise of fascism in their celebrated writings. Like his friends, Spender was drawn to other men, yet he eventually married Natasha, a world-renowned concert pianist, and started a family.

In the midst of a heady world of poetry and liberal politics, gay love affairs and tense silences, Matthew Spender grew up the child of two brilliant artists. Taught how to use adjectives by Uncle Auden and raised among the British cultural elite, Matthew led what might have been a charmed existence were it not for the tensions in his own household. His father, always susceptible to the allure of young men, was unable to stop himself, or reveal his secret, for the sake of his family; and his mother's suffering led her to infatuations of her own. A House in St John's Woods: In Search of My Parents is a son's attempt to reconstruct a portrait of his magnetic father and unconventional family out of the ambiguous experiences of his childhood.

Drawing on unpublished letters and diaries, family keepsakes and youthful memories, Matthew Spender tells the story of a singular family in the midst of its own cold war, as the artistic world of mid-century London circled around them.