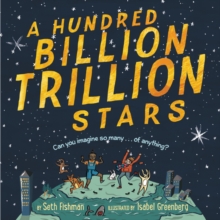 Product Description Handpicked by Amazon kidsâ€™ books editor, Seira Wilson, for Prime Book Box â€“ a childrenâ€™s subscription that inspires a love of reading. A Boston Globe/Horn Book Honor Book Winner of the Mathical Book Prize â€œThis picture book is one in a gazillion.â€â€”Jane Oâ€™Connor, the New York Timesâ€“bestselling author of the Fancy Nancy series Did you know that the earth is covered in three trillion trees? And that seven billion people weigh about the same as ten quadrillion ants? Our world is full of constantly changing numbers, from a hundred billion trillion stars in space to thirty-seven billion rabbits on Earth. Can you imagine that many of anything? The playful illustrations from New York Timesâ€“bestselling artist Isabel Greenberg and the friendly, straightforward voice of author Seth Fishman illuminate some of the biggest numbers in the universeâ€”a hundred billion trillion starsâ€”and the smallestâ€”one unique and special YOU. Here is a book for story time, for science time, for math time, for bedtime, and all the times in between. Perfect for curious children, classrooms eager for STEM content, and readers who have devoured Ada Twist, Scientist and How Much Is a Million? From School Library Journal Gr 2â€“4â€”Very likely breaking the record for the number of zeroes in a picture book, Fishman presents a tally of humongous figuresâ€”beginning with the estimated population of stars in the universe and going on to an "entire world" that is "filled with crazy numbers." The work focuses much more on how awesome and unimaginable these numbers are rather than explaining the intricacies of calculating them. No sources are provided for the totals and only at the end does Fishman admit that the strings of digits are at best ballpark estimates: "sort-of-definitely-ALMOST true." In addition, the author breaks the "-illions" down inconsistently without explaining until the endnote that terms like "billion trillion" and "sextillion" are equivalents. Greenberg places many of the strung-out sums against starry backdrops, with cartoon images of trees, animals, members of a diverse human cast, and other familiar forms, providing starting points for contemplating all those dizzying digits. VERDICT An imagination stretcher for younger audiences who enjoy marveling at mind-bending numbers.â€”John Peters, Children's Literature Consultant, New York Review â€œI read this mind-blowing book, which translates to ten minutesâ€”thatâ€™s 600 secondsâ€”of pure fun. How uniqueâ€”or should I say this picture book is one in a gazillion. It will make a great read aloud.â€ (Jane Oâ€™Connor, author of the international bestseller Fancy Nancy.) â€œIt is quite a wondrous thing to imagine the make-believe, but any child reading this book will conclude that the real magic around them is in every breath, every minute, every life lived, and that they themselves are a wondrous thing.â€ (Kate Beaton, author of King Baby and The Princess and the Pony) â€œFishman and Greenberg engagingly highlight the wondrousness of numbers and stars, as well as just about everything about our home planet. ...[it] beautifully succeeds in its mission to convey to young readers the vastness of the numbers in our midst while reassuring them that...â€œthereâ€™s only one of YOU.â€ (Horn Book (starred review)) â€œHuge numbers take on an even bigger scale in Fishman and Greenbergâ€™s insightful, awe-inspiring picture book. A secret shared between narrator and the reader kicks things offâ€¦. From there itâ€™s all about the (innumerable) details.... An auspicious primer on some very big numbers.â€ ( Kirkus Reviews) â€œIn a book that encourages readers to observe the world with wonder and curiosity, Fishman delights in throwing mammoth, even unfathomable figures at them....Greenberg illustrates in a chunky, cheery cartoon style...adding warmth to counterbalance the unwieldy numbers.â€ ( Publishers Weekly) â€œAn imagination stretcher for younger audiences who enjoy marveling at mind-bending numbers.â€ (School Library Journal)