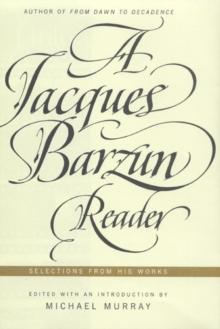 A JACQUES BARZUN READER: SELECTIONS FROM HIS WORKS

Product Description Throughout his career Jacques Barzun, author of more than thirty books, including most recently the New York Times bestseller From Dawn to Decadence, has always been known as a witty and graceful essayist, one who combines a depth of knowledge and a rare facility with words. In A Jacques Barzun Reader, Michael Murray has carefully selected from Barzun's oeuvre eighty of the most inventive, accomplished, and insightful essays, now available for the first time in one magisterial volume. The list of subjects covered has an amazing range: history, philosophy, literature, education, music -- and more. Here is Barzun's classic examination of baseball in American life, Lincoln as a literary artist, and the pleasures of reading crime fiction. Among the many diverse figures whom Barzun reexamines -- leading to fresh portraits -- are Shaw, Berlioz, Swift, both Henry and William James, Dorothy Sayers, Chapman, Agate, and Diderot. Jacques Barzun draws the reader into his enthusiasms with an infectious style and keen insights. A Jacques Barzun Reader is a feast for any reader. From Publishers Weekly H Beginning with Barzun's fearless argument for the centrality of race in Western consciousness in his 1937 essay "Race: Fact or Fiction?," and concluding with several selections from 2000's epic bestseller, From Dawn to Decadence, this is a staggering tribute to uber-critic Barzun's legendary intelligence and cantankerousness. Literature is a prime topic: his essays on Swift, Diderot and Shaw brilliantly revitalize well-worn subjects, while "How the Romantics Invented Shakespeare" intriguingly probes the historiography of the Bard's ever-changing reputation. Barzun's own occupation is another dominant concern; Barzun asks, is criticism art or craft?, coming down, conclusively, on the side of craft. Other topics include opera, politics, baseball and Paris in the 1830s. What truly impresses here is Barzun's breadth of knowledge in an age of academic specialization, he is a rare, confident master-of-all-trades. Barzun is also unafraid of being silly, as in a brief aside on the "puncreas," a gland that, when inflamed, causes people to "puncreate" uncontrollably. Of course, readers may not agree with all Barzun's conclusions: he can be exasperatingly arbitrary (detective novels are great but spy novels are not); he can also seem foggily behind the times (as with his fierce defense of "man" as a gender-neutral term). But, taken as a whole, these more than six dozen essays constitute one of the great critical collections of recent times and amply showcase one of the outstanding scholarly intellects of the last century. (Jan.)Forecast: From Dawn to Decadence may have created a new audience for Barzun, though this, a collection of previously published material, will probably get less media attention. Still, this should be a steady, long-term seller. Copyright 2001 Cahners Business Information, Inc. From Booklist Cultural critic Barzun has in his tenth decade maintained his ability to write best-sellers, most recently, From Dawn to Decadence (2000). His ability to express his erudition without condescension, which may account for his prolonged popularity, runs through this retrospective drawn from his huge archive of compositions. Rhetorical clarity animates each of the several dozen selections, for Barzun practices what he has preached for a lifetime: writing concretely, rather than abstractly; writing to convince, not to overwhelm. Still another clue to Barzun's connectedness with an audience resides in his expositions on critics of the past, especially exponents of romanticism such as William Hazlitt. Without the suffocation of academic argot, Barzun notes, Hazlitt's essays on Shakespeare's characters, for example, gave pleasure with illumination. And that trait shines through Barzun's anthology, which covers a range of artists, writers, and subjects: composer Hector Berlioz, forgotten political commentator Walter Bageh