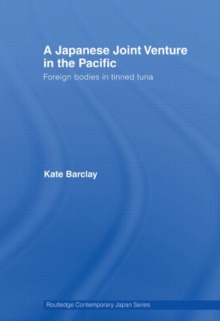 The Japanese, and other Asians, are increasingly taking over some of the roles previously played by Europeans in the Pacific islands, which is giving rise to interesting new economic relationships, and interesting new interactions between nationalities. This book considers the role of the Japanese in the Solomon Islands, focusing in particular on a joint venture between the Japanese multinational Maruha Corporation and the Solomon Islands government, which managed a tuna fishing and processing enterprise which was a mainstay of the Solomon Islands economy from the 1970s toÂ 2000.Â It considers a range of important themes includingÂ the changing nature of colonialism, the degree to which people's ethnic sense of self, and therefore their relationship with others, is affected by how modern (or primitive) their nation is perceived to be, and how all this relates to the development of capitalism, nationalism, andÂ modernity.