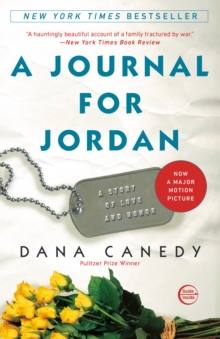 A JOURNAL FOR JORDAN: A STORY OF LOVE AND HONOR

Product Description NEW YORK TIMESÂ BESTSELLERÂ â€¢Â â€œA hauntingly beautiful account of a family fractured by war . . . filled with vivid and heartbreaking details.â€â€”The New York Times Book Review Â  â€œFull of wonderful treasures offered by a unique and spirited father . . . written with serene grace: part memoir, part love story, all heart.â€â€”James McBride, author ofÂ The Color of Water Â  In 2005, Dana Canedyâ€™s fiancÃ©, First Sergeant Charles Monroe King, began to write what would become a two-hundred-page journal for his son in case he did not make it home from the war in Iraq. He was killed by a roadside bomb on October 14, 2006. His son, Jordan, was seven months old.Â  Inspired by his example, Dana was determined to preserve his memory for their son.Â  A Journal for JordanÂ is a motherâ€™s fiercely honest letter to her child about the parent he lost before he could even speak. It is also a fatherâ€™s advice and prayers for the son he will never know. Â  A father figure to the soldiers under his command, Charles moved naturally into writing to his son. In neat block letters, he counseled him on everything from how to withstand disappointment and deal with adversaries to how to behave on a date. And he also wrote, from his tent, of recovering a young soldierâ€™s body, piece by piece, from a tankâ€”and the importance of honoring that young manâ€™s life. He finished the journal two months before his death while home on a two-week leave, so intoxicated with love for his infant son that he barely slept. This is also the story of Dana and Charles togetherâ€”two seemingly mismatched souls who loved each other deeply and lost each other too soon.Â  A Journal for JordanÂ is a tender introduction, a loving good-bye, a reporterâ€™s inquiry into her soldierâ€™s life, and a heartrending reminder of the human cost of war. Review â€œThis book is a gift, and not only to Jordan.â€ â€”USA Today â€œHeartfelt . . . Canedy used her skills as a reporter to dig beneath the official story of Kingâ€™s death. . . . These investigative passages are gripping. . . . King died a heroâ€™s death, but Canedyâ€™s embrace of life is a kind of heroism, too.â€ â€”Cleveland Plain Dealer â€œGut-wrenching . . . Canedy writes with the objective eye of a hard-line reporter yet manages to convey the complexities of the love between her and her fiance as well as the deep loss she feels in his absence. It's impossible to imagine what her pain is like, but she does a beautiful job of allowing us to come close.â€ â€”Washington Post â€œCanedy's memoir speaks to military families everywhere. . . . By openly and honestly revealing her side of their highly emotional story as well, by detailing the effects of his death on her and subsequent interactions with government brass about burial and benefits, for example . . . she gives the project a greater significance, making it especially relevant for and meaningful to countless others in similar situations.â€ â€”San Francisco Chronicle â€œPowerful . . . Not all great love stories are ignited by the lightning bolt of love at first glance; this humbler Iâ€™m-going-to-talk-myself-into-this-good-man version is believable and real. . . .Â  A Journal for Jordan is impossible to read without a sense of bitter knowledge that this principled man fell at the behest of leaders less guided by honor. That is no trick O. Henry ending. It is a denouement full of suffering, worthy of Chekhov.â€ â€”Melissa Fay Greene, The New York Times â€œCanedyâ€™s talent at evoking character makes the account of Kingâ€™s life and death not simply a story about the injustice of war, but a project in resurrection. Canedy allows King to come alive for her son and, to our benefit, for us. . . . Gripping . . . important.â€ â€”The New York Times Book Review â€œItâ€™s impossible not to be affected by her story.â€ â€”Entertainment Weekly â€œAt once inspiring and ineffably sad . . . Canedy captures the unique magnificence of the man she loved in a way that brings the beginnings of an understanding to the losses that other familie