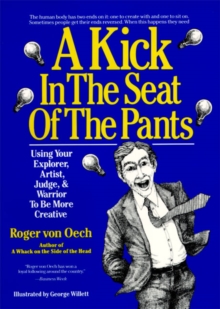 A KICK IN THE SEAT OF THE PANTS: USING YOUR EXPLORER, ARTIST, JUDGE, AND WARRIOR TO BE MORE CREATIVE

Product Description When was the last time you had a creative idea? This morning? Last month? Last year? Sometimes you need A Kick in the Seat of the Pants to get your thinking going. This book does just that by taking you on a guided tour through the four roles of the creative process-Explorer, Artist, Judge, and Warrior. When it's time to seek out new information, adopt the mindset of an Explorer. Get off the beaten path, poke around in outside areas, and pay attention to unusual patterns. When you need to create a new idea, let the Artist in you come out. Ask what-if questions and look for hidden analogies. Break the rules and look at things backwards. Add something and take something away. Ultimately, you'll come up with an original idea. When it's time to decide if your idea is worth implementing, see yourself as a Judge. Ask what's wrong and if the timing's right. Question your assumptions and make a decision. And when you carry your idea into action, be a Warrior. Put a fire in your belly, eliminate your excuses, and do what's necessary to reach your objective. Kick provides exercises, stories, tips, and Roger von Oech's proven techniques to help you strengthen each of your own creative roles. Review "Roger Von Oech has won a loyal following around the country."-- "Business Week.""In A Whack on the Side of the Head we looked at getting ideas through play; in A Kick in the Seat of the. Pants we look at the four roles of the creative process. It is a powerful idea.."-- Bob Metcalfe, Chairman, 3Com Corp"Kick's made my people more creative, and it's a lot of fun to boot."-- Bill Samuels, President, Maker's Mark Distillery"Hard-hitting and practical approaches to becoming more innovative."-- Doug King, Vice President, American Electronics Association About the Author Roger von Oech is the president of Creative Think, a California-based consulting firm that stimulates creativity and innovation in business. He has worked with such companies as: Anheuser-Busch, ARCO, Bristol Myers, DuPont, General Foods, Hallmark Cards, Hewlett-Packard, IBM, NASA, NBC, Procter & Gamble and Xerox. He is the author of the best-selling book, A Whack on the Side of the Head He is also a nationally- ranked Masters swimmer, and a collector of old television commercials. He lives with his wife, Wendy, and their two children, Athena and Alexander. Excerpt. Â© Reprinted by permission. All rights reserved. Jack's Visit To The Idea DoctorPeople who are resting on their laurels are wearing them on the wrong end.-- Malcolm Kushner, Philosopher Jack's mind felt like a head of wilted lettuce. He'd just returned from a meeting with his boss, and had found out that he wouldn't be getting the promotion he'd been hoping for. As he thought about his situation, Jack realized that he hadn't been performing very well lately He had missed deadlines on several crucial projects. And his once perceptive mind was producing trite solutions to important problems. He tried to put some pizzazz back into his thinking, but nothing worked. Finally, he went to an idea doctor for help. "I just don't seem to have it anymore," Jack explained. "All right, I'll ask you a few questions so I can figure out what your problem is," the idea doctor responded. "First, have you stuck your neck out and taken any risks lately?" "Not that I can remember," Jack answered. "Have you been asking what if? to stretch your imagination?" "I've been too busy." "Have you kept an open mind when evaluating new ideas?" "I know what works and what doesn't." The questioning went on like this for a while. Finally Jack asked, "What's the diagnosis?" "No doubt about it, you're stuck in a rut," the idea doctor proclaimed. "At first I thought it was just a case of plaque-on the-brain. Then all I'd have to do is prescribe some mental floss. But your situation is more serious." "That bad, huh?" Jack shrugged. "Yes. You've got your ends reversed." "What?" "You see, the human body has two ends on it--one