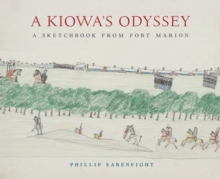 A KIOWA'S ODYSSEY: A SKETCHBOOK FROM FORT MARION

Product Description Winner of the 2009 Alfred H. Barr, Jr. Book Award from College Art Association Winner of the 2008 Award of Merit from the Pennsylvania Federation of Museums and Historical Organizations A Kiowa's Odyssey recreates a sketchbook of drawings that chronicle the experiences of seventy-two Southern Plains Indians captured by the U.S. Army in Oklahoma in 1875. To stem their ability to lead raids against white settlers, the army exiled these Arapaho, Comanche, Cheyenne, and Kiowa Indians more than 1,000 miles, by wagon, train, and steamboat, to Fort Marion, Florida. The prisoners, dazed by travel and unfamiliar surroundings, quickly found themselves subject to a process of Westernization and assimilation. Under the direction of Lieutenant Richard Henry Pratt, the Indians were made to adopt Western appearance, behavior, language, and beliefs. Pratt was a prominent advocate of Indian assimilation and many of the practices that he introduced at Fort Marion were subsequently institutionalized at the Carlisle Indian School in Pennsylvania, which he founded in 1879. The thirty-two-page sketchbook illustrates the Indians' capture, their trek to Florida, and their years at Fort Marion. The drawings were made by Etahdleuh Doanmoe (Kiowa) at Fort Marion in 1877, possibly at the request of Lieutenant Pratt. While other sketchbooks from Fort Marion survive, this is the only one that adheres closely to Western historical narrative structure and for which Pratt provided typewritten captions. After Pratt's death, his son, Mason, reorganized the sketchbook into an album - A Kiowa's Odyssey - and supplemented it with a preface and photographs of Etahdleuh. Etahdleuh's drawings illuminate the historical consciousness of a warrior artist, but despite their importance, they have not been fully understood, largely because the sketchbook was twice disassembled and eventually divided between two institutions, the Trout Gallery at Dickinson College in Pennsylvania and the Beinecke Rare Book and Manuscript Library at Yale University in Connecticut. This publication is the first to draw together the disparate elements of the original sketchbook, reconstruct its original form and subsequent transformation into an album, and distinguish it from drawings by other artists at Fort Marion. It includes essays discussing the history of events, reconstructing the sketchbook, analyzing the drawings, and studying other Fort Marion sketchbooks and drawings. Review The Kiowa's Odyssey is an important contribution to the literature on the warrior art of the For Marion prisoners and demonstrates the importance of Etahdleuh's sketchbook as a resource for continued research in anthropology, history, Native American studies, art history, and other scholarly trajectories. ( Great Plains Quarterly) Phillip Earenfight has produced a beautiful book with actual-sized and true-colored ledger drawings by Etahdleuh Doanmoe. He has also brought together new essays by four major scholars, who provide complementary perspectives and shed new light on the drawings, the cohort of warrior artists, and this singular moment in Southern Plains Indian history. ( Studies in American Indian Literature) I highly recommend this book to any library but especially to the tribal college and university libraries, where patrons interested in art, Native art, history, or historical art and perspectives, will find inspirational insights. ( Tribal College Journal) I like this work and feel that it accomplishes its primary objectives well. It contributes to a growing body of Plains Indians graphic arts for anyone interested in ledger-style art and the Fort Marion experience. Each author adds unique insights into the sketchbook and its history. It is interesting, well-illustrated, and thorough in its application of analytical manuscript and document analysis, and it provides several methodological contributions that can be applied to future studies of similar manuscripts. ( Ame