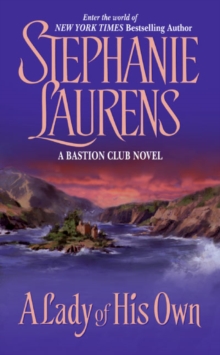 A LADY OF HIS OWN (BASTION CLUB)

Product Description The seven members of the Bastion Club have served loyally in the perilous service of the Crown. Now they've banded together to support one another through their most dangerous mission of all: getting married. When Charles St. Austell returns home to claim his title as earl, and to settle quickly on a suitable wife as well, he discovers that experience has made him impatient of the young ladies who vie for his attentionâ€”with the exception of Lady Penelope Selborne. Years ago, Charles and Penelope's youthful ardor was consummated in an unforgettable afternoon. Charles is still haunted by their interlude, but Penny refuses to have anything more to do with him. If controlling her heart was difficult before, resisting a stronger, battle-hardened Charles is well nigh impossible, yet Penelope has vowed she won't make the same mistake twice, nor will she marry without love. But when a traitorous intrigue draws them together, then ultimately threatens them bothâ€”will Penny discover she has a true protector in Charles, her first and only love, who now vows to make her his own? From Publishers Weekly Regency romance juggernaut Laurens shows signs of fatigue in the third book of her Bastion Club septet (after The Lady Chosen and A Gentleman's Honor). Lord Charles St. Austell, earl of Lostwithiel, is one of the seven noble members of the Bastion Club ("a last bastion against the matchmakers of the ton") who served as spies during the Napoleonic wars and who still do a bit of investigating for the Crown when they're not braving eager ladies on the marriage mart. At his country estate, Charles encounters old friend (and old flame) Lady Penelope Selborne, who's up to her neck in intrigue. Penny's late brother may have been involved in schemes to smuggle secrets to France during the warâ€”schemes that seem to be continuing with new sources even after his death. The novel features all the steamy sensuality for which Laurens is known, but the sex scenes lack the spark typical of her best work; Penny and Charles spend far too much time staring longingly at each other, dutifully denying their own urges. The unwieldy spy plot, meanwhile, progresses with agonizing slowness as the two interrogate every suspicious newcomer in town. Dedicated fans will probably stick with Laurens through the remaining four Bastion Club titles, but she's going to have to pick up the pace if she's to keep others intrigued. Copyright Â© Reed Business Information, a division of Reed Elsevier Inc. All rights reserved. About the Author #1 New York Times bestselling author Stephanie Laurens began writing as an escape from the dry world of professional science, a hobby that quickly became a career. Her novels set in Regency England have captivated readers around the globe, making her one of the romance world's most beloved and popular authors.