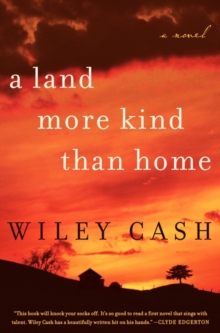 A LAND MORE KIND THAN HOME: A NOVEL

Product Description â€œBold, daring, graceful, and engrossing.â€â€”Bobbie Ann Mason â€œThis book will knock your socks offâ€¦.A first novel that sings with talent.â€â€”Clyde Edgerton A stunning debut reminiscent of the beloved novels of John Hart and Tom Franklin, A Land More Kind Than Home is a mesmerizing literary thriller about the bond between two brothers and the evil they face in a small western North Carolina town For a curious boy like Jess Hall, growing up in Marshall means trouble when your mother catches you spying on grown-ups. Adventurous and precocious, Jess is enormously protective of his older brother, Christopher, a mute whom everyone calls Stump. Though their mother has warned them not to snoop, Stump can't help sneaking a look at something he's not supposed toâ€”an act that will have catastrophic repercussions, shattering both his world and Jess's. It's a wrenching event that thrusts Jess into an adulthood for which he's not prepared. While there is much about the world that still confuses him, he now knows that a new understanding can bring not only a growing danger and evilâ€”but also the possibility of freedom and deliverance as well. Told by three resonant and evocative charactersâ€”Jess; Adelaide Lyle, the town midwife and moral conscience; and Clem Barefield, a sheriff with his own painful pastâ€”A Land More Kind Than Home is a haunting tale of courage in the face of cruelty and the power of love to overcome the darkness that lives in us all. These are masterful portrayals, written with assurance and truth, and they show us the extraordinary promise of this remarkable first novel. Â  Amazon.com Review Author One-on-One: Wiley Cash and Adriana Trigiani Bestselling author most recent books include the novels The Shoemaker's Wife and Brava, Valentine She lives with her husband and daughter in Greenwich Village. Adriana Trigiani: First and foremost Iâ€™d like to congratulate you on the success of your debut novel, A Land More Kind Than Home. As a writer, I know that inspiration can come from many different placesâ€” a quote, a childhood experience, the sky is the limit. What inspired you to write this novel? Wiley Cash: Thanks, Adriana. Iâ€™d like to congratulate you on the success of The Shoemakerâ€™s Wife. The inspiration for this novel kind of found me. In the fall of 2003 I left North Carolina and moved to Lafayette, Louisiana, to attend graduate school. One night, in a class on African-American literature, my professor brought in a news story about a young African-American boy with autism who was smothered in a healing service on the south side of Chicago. I found the story incredibly tragic, but I was also interested in a community of believers that would literally believe something to death. I felt compelled to tell this boyâ€™s story and the story of the community surrounding him. AT:Truth be told, Iâ€™m a big fan of the â€™80sâ€”big hair, some of the best music of all timeâ€”whatâ€™s not to like! Why did you choose to set your novel during this era? Do you see this particular time period as having an important resonance for contemporary America? WC: The easiest answer is that Jess Hall, one of my three narrators, is nine years old in 1986. I was nine in 1986, and it was easy for me to remember how I viewed the world as a nine year old. But I soon realized that the â€™80s were a very complicated decade, and I have clear memories of trying to make sense of a lot of the things that I was seeing and hearing at church, at school, and at home. When I sat down to write A Land More Kind Than Home I recalled how things seemed in the church and in the community when I was a kid, and I balanced that seeming against the reality of being. This conflict between seeming and beingâ€”not just in churches but in families as wellâ€”is what drives much of the novel. AT: One of the things I love most about this novel is that itâ€™s told from very different perspectivesâ€”from a young boy to a woman in her eighties to a middle-aged sheriff. As readers can see