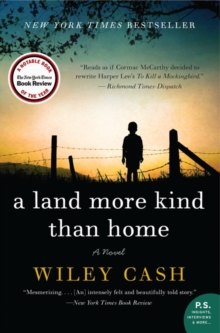 A LAND MORE KIND THAN HOME: A NOVEL

Product Description In his phenomenal debut novelâ€”a mesmerizing literary thriller about the bond between two brothers and the evil they face in a small North Carolina townâ€”author Wiley Cash displays a remarkable talent for lyrical, powerfully emotional storytelling. A Land More Kind than Home is a modern masterwork of Southern fiction, reminiscent of the writings of John Hart (Down River), Tom Franklin (Crooked Letter, Crooked Letter), Ron Rash (Serena), and Pete Dexter (Paris Trout)â€”one that is likely to be held in the same enduring esteem as such American classics as To Kill a Mockingbird, Of Mice and Men, and A Separate Peace. A brilliant evocation of a place, a heart-rending family story, a gripping and suspenseful mysteryâ€”with A Land More Kind than Home, a major American novelist enthusiastically announces his arrival. Review â€œMesmerizing . . . only Jess knows why his autistic older brother died on the very day he was taken into the church, and itâ€™s his voice that we carry away from this intensely felt and beautifully told story.â€ ( New York Times Book Review) â€œCash adeptly captures the rhythms of Appalachian speech, narrating his atmospheric novel in the voices of three characters . . . The story has elements of a thriller, but Cash is ultimately interested in how unscrupulous individuals can bend decent people to their own dark ends.â€ ( Washington Post) â€œAbsorbing . . . Cash uses well-placed flashbacks to flesh out his characters . . . and to illuminate a familiar truth of Southern lit: Many are the ways that fathers fail their sons.â€ ( Entertainment Weekly) â€œAs lyrical, beautiful, and uncomplicated as the classic ballads of Appalachia, Cashâ€™s first novel is a tragic story of misplaced faith and love gone wrong . . . In a style reminiscent of Tom Franklin and John Hart, Cash captures the readerâ€™s imagination.â€ ( Library Journal (starred review)) â€œThis book will knock your socks off. Itâ€™s so good to read a first novel that sings with talent. Wiley Cash has a beautifully written hit on his hands.â€ ( Clyde Edgerton, author of The Night Train) â€œA riveting story! The writing is bold, daring, graceful, and engrossing.â€ ( Bobbie Ann Mason, author of In Country) â€œI try to state the truth and dislike flinging superlatives about with mad abandon, but I have been so deeply impressed by this novel that only superlatives can convey the tenor of my thought: this is one of the most powerful novels I have ever read.â€ ( Fred Chappell, author of Brighten the Corner Where You Are) â€œThis novel has great cumulative power. Before I knew it I was grabbed by the ankle and pulled down into a full-blown Greek tragedy.â€ ( Gail Godwin, author of Evensong) â€œThe first thing that struck me about Wileyâ€™s novel is the beautiful prose: the narrative is strong, clean, direct and economical. . . . I think this could be the beginning of a long, fruitful career.â€ ( Ernest J. Gaines, author of A Lesson Before Dying) â€œCashâ€™s debut novel explores Faulkner-Oâ€™Connor country . . . As lean and spare as a mountain ballad, Cashâ€™s novel resonates perfectly, so much so that it could easily have been expanded to epic proportions. An evocative work about love, fate and redemption.â€ ( Kirkus Reviews) From the Back Cover For a curious boy like Jess Hall, growing up in Marshall means trouble when you get caught spying on grown-ups. Adventurous and precocious, Jess is protective of his older brother, Christopher, a mute whom everyone calls Stump. Though their mother has warned them not to snoop, Stump can't help sneaking a look at something he's not supposed toâ€”an act that will have repercussions. It's a wrenching event that thrusts Jess into an adulthood for which he's not prepared. He now knows that a new understanding can bring not only danger and evilâ€”but also the possibility of freedom and deliverance. Told by resonant and evocative characters, A Land More Kind Than Home is a haunting tale of courage in the face of cruelty and the power of love to ov