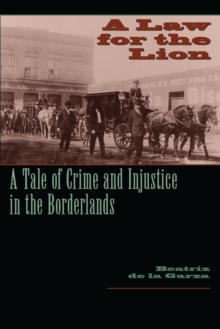 A LAW FOR THE LION: A TALE OF CRIME AND INJUSTICE IN THE BORDERLANDS (JACK AND DORIS SMOTHERS SERIES IN TEXAS HISTORY, LIFE, AND CULTURE, NUMBER ELEVEN)

"Esto no es cosa de armas" (this is not a matter for weapons). These were the last words of Don Francisco GutiÃ©rrez before Alonzo W. Allee shot and killed him and his son, Manuel GutiÃ©rrez. What began as a simple dispute over Allee's unauthorized tenancy on a GutiÃ©rrez family ranch near Laredo, Texas, led not only to the slaying of these two prominent Mexican landowners but also to a blatant miscarriage of justice.

In this engrossing account of the 1912 crime and the subsequent trial of Allee, Beatriz de la Garza delves into the political, ethnic, and cultural worlds of the Texas-Mexico border to expose the tensions between the Anglo minority and the Mexican majority that propelled the killings and their aftermath. Drawing on original sources, she uncovers how influential Anglos financed a first-class legal team for Allee's defense and also discusses how Anglo-owned newspapers helped shape public opinion in Allee's favor. In telling the story of this long-ago crime and its tragic results, de la Garza sheds new light on the interethnic struggles that defined life on the border a century ago, on the mystique of the Texas Rangers (Allee was said to be a Ranger), and on the legal framework that once institutionalized violence and lawlessness in Texas.