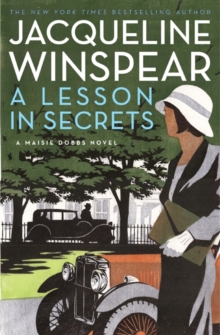 A LESSON IN SECRETS: A MAISIE DOBBS NOVEL

Product Description Maisie Dobbs' first assignment for the British Secret Service takes her undercover to Cambridge as a professorâ€”and leads to the investigation of a web of activities being conducted by the emerging Nazi Party. In the summer of 1932, Maisie Dobbs' career takes an exciting new turn when she accepts an undercover assignment directed by Scotland Yard's Special Branch and the Secret Service. Posing as a junior lecturer, she is sent to a private college in Cambridge to monitor any activities "not in the inter-ests of His Majesty's government." When the college's controversial pacifist founder and principal, Greville Liddicote, is murdered, Maisie is directed to stand back as Detective Chief Superintendent Robert MacFarlane and Detective Chief Inspector Richard Stratton spearhead the investigation. She soon discovers, however, that the circumstances of Liddicote's death appear inextricably linked to the suspicious comings and goings of faculty and students under her surveillance. To unravel this web, Maisie must overcome a reluctant Secret Service, discover shameful hidden truths about Britain's conduct during the Great War, and face off against the rising powers of the "Nationalsozialistische Deutsche Arbeiterpartei"â€”the Nazi Partyâ€”in Britain. As the storm clouds of World War II gather on the horizon, this pivotal chapter in the life of Maisie Dobbs foreshadows new challenges and powerful enemies facing the psychologist and investigatorâ€”and will engage new readers and loyal fans of this "outstanding" series (Marilyn Stasio, New York Times Book Review). Amazon.com Review Amazon Exclusive: Lee Child Interviews Jacqueline Winspear Jacqueline Winspear, like her interviewer, the iconic, bestselling author , originally hails from the United Kingdom. A Lesson in Secrets is her eighth novel featuring psychologist-investigator and former WW1 nurse, Maisie Dobbs. Here she talks with Child about her work on the series, and her enduring interest in the aftermath of WW1. Lee Child: People are often surprised that I'm a huge Maisie Dobbs fan, because Jack Reacher is all about a kind of Spartan American masculinity, and Maisie Dobbs is all about a kind of feminine English refinement. But they're both strong, unconventional people. Perhaps that's the cross-genre appeal? Do you find that Maisie attracts an unusual mix of readers? Jacqueline Winspear: Iâ€™m thrilled youâ€™re such a Maisie Dobbs fan--and you can count me among those millions of Jack Reacher fans. Maisie and Reacher are both unconventional, but I believe another factor in their cross-genre appeal is that both have endured life-changing challenges. Maisie attracts diverse readers: men and women, all age groups, veterans, nurses, college students, people who have faced troubles, and people interested in the era. LC: And in fact your novels are driven by violence far worse than mine--off the page, granted, but thereâ€™s no getting around the fact that at the heart of your books is the aftermath of a horrendous war, with its attendant violence and death. How do you see the role of violence in your novels? JW: I think you hit the theme there with â€œaftermath.â€ The violence in my books is that searing, painful residue left by the passing of a terrible time, when people were also crushed emotionally by the deep losses over a four-year period. In addition, thereâ€™s that element of violence that lingers--in Among the Mad, for example--when warâ€™s tentacles will not let go. We see that again today in the stories of veterans who are still fighting their wars, but the conflict is raging inside them. LC: As a kid in England I remember seeing hundreds of maimed old men, and hundreds of lonely old women. My grandfather was an example of the first, and two great-aunts examples of the second - sad reminders of a terrible time. Was it something similar that drew you to the First World War and the â€œBetween the Warsâ€ era that followed? JW: I have the same memories--my gra