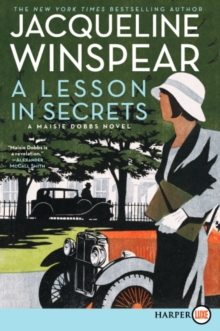 A LESSON IN SECRETS: A MAISIE DOBBS NOVEL

Private investigator Maisie Dobbs receives her first assignment from the British Secret Service in A Lesson in Secrets, the eighth book in Jacqueline Winspearâ€™s award-winning mystery series. Sent to pose as a junior lecturer at a private college in Cambridge, she will monitor any activities â€œnot in the interests of His Majestyâ€™s government.â€ When the collegeâ€™s pacifist founder is murdered, Maisie finds herself in the midst of sinister web of murder, scandal, and conspiracy, activities that point towards members of the ascendant Nationalsozialistische Deutsche Arbeiterparteiâ€”the Nazi Partyâ€”on Britainâ€™s shores. An instant classic, and sure to captivate long-time Maisie Dobbs fans as well as readers of Agatha Christie, Elizabeth George, and Alexander McCall Smith, A Lesson in Secrets is â€œa powerful and complex novel, one that will linger in memory as a testament to her talent and her humanityâ€ (Richmond Times-Dispatch).