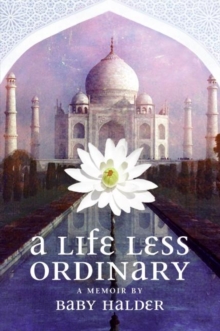 A LIFE LESS ORDINARY: A MEMOIR

Abandoned by her mother, beaten by her father, and hurriedly married off at twelve to an abusive man twice her age, Baby Halder's early life was marked by overwhelming challenges and heartbreak. Exhausted and desperate, the young mother finally fled with her three children in 1999 to Delhi, where she found work as a maid in some of the city's wealthiest homes.

Expected to serve her employers' every grueling demand, Halder faced a staggering workload that often left her no time to care for her own children.

The young woman's luck finally turned when she started working for Prabodh Kumar, a retired anthropology professor who noticed Halder's interest in his library. Kumar helped her to read his books and newspapersâ€”which she devoured enthusiasticallyâ€”then suggested that she write down her own life story. In A Life Less Ordinary, the fascinating result of her writing sessions with Kumar, Halder speaks for a multitude of Indian women, revealing a world of poverty and subjugation few outsiders have heard about. Halder writes simply and candidly of her life as a young girl, and later as a struggling mother.

Without a trace of melodrama or self-pity, she describes her experiences of growing up poor and neglected, struggling to manage children and a violent husband while she herself was only fourteen years old, and, finally, of escaping her past ultimately to triumph as a writer.

Already a huge success in India, where it has been published in Hindi, Bengali, and several other languages, A Life Less Ordinary is an astonishing story of strength, courage, and determination that continues to inspire readers everywhere.