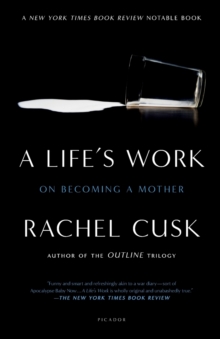 A LIFE'S WORK: ON BECOMING A MOTHER

Product Description A New York Times Book Review Notable Book, A Lifeâ€™s Work: On Becoming a Mother is multi-award-winning author Rachel Cuskâ€™s honest memoir that captures the life-changing wonders of motherhood. Selected by the New York Times as one of the 50 Best Memoirs of the Past 50 YearsThe experience of motherhood is an experience in contradiction. It is commonplace and it is impossible to imagine. It is prosaic and it is mysterious. It is at once banal, bizarre, compelling, tedious, comic, and catastrophic. To become a mother is to become the chief actor in a drama of human existence to which no one turns up. It is the process by which an ordinary life is transformed unseen into a story of strange and powerful passions, of love and servitude, of confinement and compassion. In a book that is touching, hilarious, provocative, and profoundly insightful, novelist Rachel Cusk attempts to tell something of an old story set in a new era of sexual equality. Cuskâ€™s account of a year of modern motherhood becomes many stories: a farewell to freedom, sleep, and time; a lesson in humility and hard work; a journey to the roots of love; a meditation on madness and mortality; and most of all a sentimental education in babies, books, toddler groups, bad advice, crying, breastfeeding, and never being alone.â€œFunny and smart and refreshingly akin to a war diary?sort of Apocalypse Baby Nowâ€¦A Lifeâ€™s Work is wholly original and unabashedly true.â€?The New York Times Book Review From The New Yorker In "A Room of One's Own," Virginia Woolf wrote that the best writing is distinguished by its lack of complaint. Cusk, a British novelist, found after the birth of her first child that she was continuously sharing with someone else the room she was accustomed to occupying alone; six months into her daughter's first year, she handed her partner the baby and began writing down her particular experience of new motherhood before it escaped. Her account is extraordinary for its absence of polemic: she writes with the intelligence, wit, and keen eye for detail demanded by any kind of reporting, and the result is a book on the subject curiously unlike any other. Copyright Â© 2005 The New Yorker Review â€œI love reading it, and found it fascinating, but I also found it dangerous. An incitement to riot...it's an extraordinary piece of work and the writing is utterly beautiful...I laughed out loud, often, in painful recognition.â€ ?Esther Freud, author of Hideous Kinky"Rachel Cusk writes about new motherhood with an honesty and clarity that makes this memoir feel almost illicit. Sleepless nights, yes; colic, yes; but also a raw, frantic love for her firstborn daughter that she depicts and dissects with both rigor and amazement. " ? Jennifer Szalai, The New York Times Book Review About the Author Rachel Cusk is the author of Outline, Transit, the memoirs A Lifeâ€™s Work, The Last Supper, and Aftermath, and several novels: Saving Agnes, winner of the Whitbread First Novel Award; The Temporary; The Country Life, which won a Somerset Maugham Award; The Lucky Ones; In the Fold; Arlington Park; and The Bradshaw Variations. She was chosen as one of Grantaâ€™s 2003 Best of Young British Novelists. She lives in London.