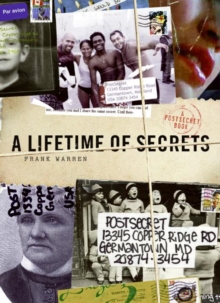 A LIFETIME OF SECRETS: A POSTSECRET BOOK

Product description The compiler of postsecret.com presents a collection of creatively decorated postcards revealing the sender's provocative secrets. Amazon.com Review The award-winning PostSecret project's most profound and stunning postcards to date For the past three years Frank Warren has invited people of all backgrounds and nationalities to send him creatively decorated postcards bearing secrets they have never before revealed. He has shared these PostSecrets on his award-winning blog, www.PostSecret.com, in an internationally traveling art exhibit, and in three electrifying books: the bestselling PostSecret, My Secret, and The Secret Lives of Men and Women. Now, in his most extraordinary book yet, Warren again delves into our collective confessions, presenting a never-before-seen selection of provocative and moving PostSecrets. A Lifetime of Secrets lays bare our private fears, hopes, regrets, and desires, from people as young as eight and as old as eighty. From painful admissions of infidelity to breathtaking revelations and endearing sentiments, Warren's latest collection will shock and move readers of every age, revealing secrets that have haunted their creators for a lifetime. Six PostSecrets from A Lifetime of Secrets Here are six of the PostSecrets included in A Lifetime of Secrets, and never before seen online. Click on each image to see a larger version. Frank Warren's Introduction to A Lifetime of Secrets When I told my father I was collecting secrets from strangers for an art project, he didn?t know what to think. I tried to explain how the thousands of secrets that had been mailed to me were more than mere confessions. They could be beautiful, funny, sorrowful, inspiring. "But, Frank," he asked, "why are you soliciting secrets from strangers, and why would anyone tell you a real secret?" I invited my father to fly out for a PostSecret art exhibit in Washington, D.C., where hundreds of the postcards were on display. More than 15,000 people came to see the secrets, and my father was there, day after day, to hear many of their transformative stories. Some people told me they recognized a hidden part of themselves on a stranger?s postcard. Others shared personal experiences of how talking about a painful secret had helped heal a lifelong relationship. The exhibit came to an end and I took my father back to the airport to catch a red-eye flight home. During our drive we passed through a long dark stretch of highway when my father broke the silence by asking me, "Do you want to know my secret?" He bravely recounted a traumatic childhood experience. When he finished, we had a true talk that gave me a richer understanding of my father and recast our relationship. ? ? ? For A Lifetime of Secrets, the fourth PostSecret book, I've selected postcards that show how secrets can reveal a momentary impulse or haunt us for decades and arranged them by age to follow the common journey we all take through childhood, adolescence, adulthood, maturity. Stretched over a full lifespan, the secrets expose the meaningful ways we change over time, and the surprising ways we don't. The postcards narrate childhood stories that have never been spoken; they voice the guarded confessions of our parents and grandparents. They confirm that our rich interior lives are not defined by how old we are, and that with aging comes not only loss but also the possibility of grace and wisdom. The following two secrets arrived in my mailbox the same week. The postmarks on each card were different, but when I posted them together on the PostSecret website (www.postsecret.com) they seemed as though they could have been written by the same person at two different points in her life. I am a junior in high school. I have good friends and a loving family. I am smart. I am a good athlete and musician. But I would trade all that in if it meant I would be beautiful. I spent my high school years believing I was