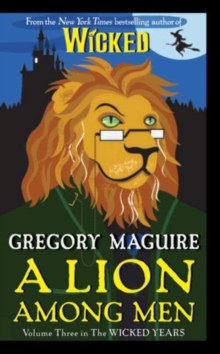 A LION AMONG MEN: VOLUME THREE IN THE WICKED YEARS

Product Description Return to a darker Oz with Gregory Maguire. In A Lion Among Men, the third volume in Maguireâ€™s acclaimed, New York Times bestselling series The Wicked Years, a fuller, more complex Cowardly Lion is brought to life and gets to tell his remarkable tale. It is a story of oppression and fear in a world gone mad with war feverâ€”of Munchkins, Wizards, and Wicked Witchesâ€”and especially of a gentle soul and determined survivor who is truly A Lion Among Men. Review A New York Times, San Francisco Chronicle, Boston Globe, Wall Street Journal, Denver Post, and USA Today bestseller (No Source) â€œMaguireâ€™s work is melodic, symphonic and beautiful; it is dejected and biting and brave. . . . In fabulous details and self-mocking language, Maguire displays his gift for whimsical portrayals of the broken, the powerless, the hopeless, the bad.â€ ( Los Angeles Times) â€œMuch to savor, laugh at, and think about. . . . A page-turning fantasy and a timely political allegory.â€ ( USA Today) â€œEntertaining....The author mixes some relatively weighty existential themes?the search for self, faith, redemption?into his whimsical story line. [A] darkly enchanting sagaâ€ ( Publishers Weekly) â€œThis Oz goes far beyond L. Frank Baumâ€™s; itâ€™s as surreal as a dream, but as immaculately and impeccably detailed as history. Maguireâ€™s wizardlike grasp over every aspect of this reinvented land rivals classic literary landscapes like Tolkienâ€™s Middle Earth and Faulknerâ€™s Yoknapatawpha County.â€ (Albany Times Union) â€œSo well-crafted that readers of all ages could enjoy witnessing Brrrrâ€™s transformation from an insecure kitten in the woods to a compassionate, engaged â€˜manimal.â€™â€ (Christian Science Monitor) â€œThe third book in Maguireâ€™s Wicked Years is at once funny, charming, harrowing, bleak and incredibly beautiful.â€ (The American Chronicle) â€œEngrossing...Maguire is a masterful storyteller with an uncanny flair for mixing political and personal while exploring what it means?and what it costs?to be accepted in a society.â€ (New York Daily News) â€œAs usual, Maguire, a seasoned fabulist, populates his version of Oz with a cast of utterly fantastical characters who must face their own inner demons while tumult and uncertainty rages around them. An absolute must-read for fans of this ever-evolving dark fairy tale.â€ ( Booklist) â€œThe minute you open A Lion Among Men, youâ€™re back in Maguireâ€™s exquisitely detailed environment, caught up once again in his geography, his characters, his worldview, touched anew by the loneliness that lurks in the heart of all things.â€ (New Orleans Times-Picayune) From the Back Cover While civil war looms in Oz, Brrrâ€”the Cowardly Lionâ€”surrenders the story of his life to a tetchy oracle named Yackle. Abandoned as a cub, Brrr's path from infancy in the Great Gillikan Forest is no Yellow Brick Road. Seeking to redress an early mistake, he trudges through a swamp of ghosts, becomes implicated in a massacre of trolls, falls in love with a forbidding Cat princess, and avoids a jail sentence by agreeing to serve as a lackey to the war-mongering Emperor of Oz. A portrait of a would-be survivor and a panoramic glimpse of a world gone shrill with war fever, Gregory Maguire's A Lion Among Men is written with the sympathy and power that have made his books contemporary classics. About the Author Gregory Maguire is the New York Times bestselling author of Confessions of an Ugly Stepsister; Lost; Mirror Mirror; and the Wicked Years, a series that includes Wicked, Son of a Witch, A Lion Among Men, and Out of Oz. Now a beloved classic, Wicked is the basis for a blockbuster Tony Awardâ€“winning Broadway musical. Maguire has lectured on art, literature, and culture both at home and abroad. He lives with his family near Boston, Massachusetts.