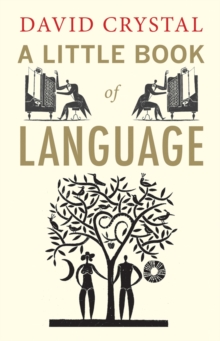 Product Description Now in paperback, in the tradition of E. H. Gombrich's A Little History of the World, a lively journey through the story of language With a language disappearing every two weeks and neologisms springing up almost daily, an understanding of the origins and currency of language has never seemed more relevant. In this charming volume, a narrative history written explicitly for a young audience, expert linguist David Crystal proves why the story of language deserves retelling. From the first words of an infant to the peculiar modern dialect of text messaging, A Little Book of Language ranges widely, revealing languageâ€™s myriad intricacies and quirks. In animated fashion, Crystal sheds light on the development of unique linguistic styles, the origins of obscure accents, and the search for the first written word. He discusses the plight of endangered languages, as well as successful cases of linguistic revitalization. Much more than a history, Crystalâ€™s work looks forward to the future of language, exploring the effect of technology on our day-to-day reading, writing, and speech. Through enlightening tables, diagrams, and quizzes, as well as Crystalâ€™s avuncular and entertaining style, A Little Book of Language will reveal the story of language to be a captivating tale for all ages. Review "Demotic, lively, rigorous but unabashedly unpedantic David Crystal remind[s] us that living languages know no boundaries, that they adapt themselves joyously to new conditions. Here he indulges himself with great good humour in his little book of love for the pleasures of language and words worldwide."â€”Iain Finlayson, The Times "David Crystal . . . is a charming tour guide. . . . He is excited, not cranky, about how language is changing in the Internet age."â€”Jan Gardner, The Boston Globe "A Little Book of Language may be for children (of all ages, as the saying goes), yet it's by no means childish or juvenile. In other words, buy it for your son or daughter, but read it yourself."â€”Michael Dirda, Washington Post "Crystal here writes for the true beginner, but does so with his usual clarity and authority, as he ranges from ancient etymologies to modern text-messaging. The chaptersâ€”again 40 of themâ€”are made doubly engaging by Jean-Manuel Duvivier's frolicsome, highly stylized black-and-white illustrations."â€”Michael Dirda, Washington Post "In his light and amusing A Little Book of Language, David Crystal treats the world's 6,000 tonguesâ€”which are disappearing at an alarming rateâ€”as a natural resource no less precious than our oceans and forests."â€”The Daily Beast "David Crystal, a well-known linguist, knows about 100,000 words, which is certainly impressive, but he then reminds us thatâ€™s only about a 10th of the words in the English language. Thereâ€™s a good chapter on spelling, a skill that seems to bear surprisingly little relation to intelligence, as well as on the inadequacies of the computer spellchecker, a blind guide indeed. To sample his own feelings for words, see his bit on the word aftermath."â€” The Sunday Telegraph ". . . an enlightening and entertaining celebration of language and linguistics."â€”PD Smith, The Guardian "[An] exhilarating romp through the mysteries and vagaries of language. . . . This is the perfect primer for anyone interested in the subject."â€”Publishers Weekly (starred review) "A Little Book of Language is a paean to language in all its guises. Crystal has clearly thought long and hard about his subject. . . . [H]e is always revealing and thought-provoking."â€”David B. Williams, Seattle Times "Crystal rolls the basics of languageâ€”plus a few quirky insights--into one neat little package."â€”Seed Magazine "Delightfully approachable . . . [a] 101-level of study with a heavy helping of charm and nary a dash of condescension."â€”Megan Stride, PopMatters "The prolific British language writer, David Crystal, has produced another winner."â€”Visualthesuarus.com "David Crystal is not just a grea