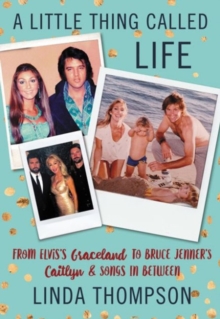 A LITTLE THING CALLED LIFE: ON LOVING ELVIS PRESLEY, BRUCE JENNER, AND SONGS IN BETWEEN

Product Description Award-winning songwriter Linda Thompson breaks her silence, sharing the extraordinary story of her life, career, and epic romances with two of the most celebrated, yet enigmatic, modern American superstarsâ€”Elvis Presley and Bruce Jenner. For the last forty years, award-winning songwriter Linda Thompson has quietly led one of the most remarkable lives in show business.Â  The longtime live-in love of Elvis Presley, Linda first emerged into the limelight during the 1970s when the former beauty pageant queen caught the eye of the King.Â  Their chance late-night encounter at a movie theater was the stuff of legend, and it marked the beginning of a whirlwind that would stretch across decades, leading to a marriage with Bruce Jenner, motherhood, and more drama than she ever could have imagined. Now for the first time, Linda opens up about it all, telling the full story of her life, loves, and everything in between.Â  From her humble beginnings in Memphis to her nearly five year relationship with Elvis, she offers an intimate window into their life together, describing how theirÂ  Southern roots fueled and sustained Gracelandâ€™s greatest romance. Going inside their wild stories and tender moments, she paints a portrait of life with the King, as raucous as it is refreshing. But despite the joy they shared, life with Elvis also had darkness, and her account also presents an unsparing look at Elvisâ€™s twin demonsâ€”drug abuse and infidelityâ€”forces he battled throughout their time together that would eventually end their relationship just eight months before his untimely death. It was in the difficult aftermath of Elvisâ€™s death that Linda found what she believed was her true home: the arms of Olympic gold medal-winner Bruce Jenner.Â  Detailing her marriage to Bruce, Linda reveals the apparently perfect life that they built with their two young sonsâ€”Brandon and Brodyâ€”before Bruce changed everything with a secret heâ€™d been carrying his entire life, a secret that Linda herself kept for nearly thirty years, a secret that Bruceâ€™s transition to Caitlyn Jenner has finally laid bare for the world.Â  Providing a candid look inside one of the most challenging moments of her life, Linda uncovers the struggles she went through as a woman and a mother, coming to terms with the reality of Bruceâ€™s identity and resolving to embrace him completely no matter what, even as it meant they could no longer be together, And yet, despite her marriage unraveling, her search for love was not over, eventually leading her to the legendary music producer and musician David Foster, a relationship that lasted for 19 tumultuous years, resulting in a bond that spurred her songwriting career to new heights but also tested her like never before.Â  Filled with compelling and poignant stories and 16 pages of photographs, A Little Thing Called Life lovingly recounts Lindaâ€™s incredible journey through the years, bringing unparalleled insight into three legendary figures. Review â€œCourageous and passionate enough to always embrace change, Linda has infused her life, love, and creativity with spirituality and a truly open heart.â€ (Jane Seymour, actress) â€œLinda and Elvis sitting in bed doing [Monty] Python sketches in shrilt middle-aged womenâ€™s voices was something I found hard to believe. I love this woman. You will too.â€ (Eric Idle, comedian) â€œLinda has led an extraordinary life filled with both blessings and challenges, but she has met them both with grace and kindness.â€ (Roma Downey, actress) â€œFrom Gracelandâ€™s Jungle Room to the beaches of Malibu, my dear friend Linda shares her incredibly interesting and emotional journey, where she never once lost her sense of humor or maiden name.â€ (Kevin Nealon, comedian) â€œOnce in a while a memoir comes along that will change your life. This is not that book, but it is a fascinating inside look at pop-culture history from the nicest, most beautiful woman in the world.â€ (Jon Lovitz, comedian) â€œLinda Thompson has had quit