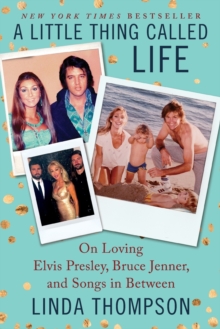 A LITTLE THING CALLED LIFE: ON LOVING ELVIS PRESLEY, BRUCE JENNER, AND SONGS IN BETWEEN

Product Description Award-winning songwriter Linda Thompson breaks her silence, sharing the extraordinary story of her life, career, and epic romances with two of the most celebrated, yet enigmatic, modern American superstarsâ€”Elvis Presley and Bruce Jenner For the last forty years, award-winning songwriter Linda Thompson has quietly led one of the most remarkable lives in show business. The longtime live-in love of Elvis Presley, Linda emerged into the limelight during the 1970s when the former beauty queen caught the eye of the King. Their chance encounter was the stuff of legend, and marked the beginning of a whirlwind that stretched decades, leading to a marriage with Bruce Jenner, motherhood, and more drama than she could have imagined.Â  Now, for the first time, Linda opens up about it all, telling the extraordinary story of her life, career, epic romances, and everything in between. Going inside the wild stories and tender moments with Elvis, Linda paints a romance as raucous as it is refreshing. But despite the joy they shared, Elvis also had darkness, which ended their relationship shortly before his untimely death. It was in the difficult aftermath of Elvisâ€™s death that Linda found what she believed was her true home: the arms of Bruce Jenner. Linda reveals the â€œperfectâ€ life they built before Bruce changed everything with a secret heâ€™d carried his entire life, one that Linda kept for nearly thirty years. From living with the King to her marriage with legendary music producer and musician David Foster, Linda Thompson lovingly recounts her incredible journey, bringing unparalleled insight into a trio of remarkable people she loved. Â  Review â€œCourageous and passionate enough to always embrace change, Linda has infused her life, love, and creativity with spirituality and a truly open heart.â€ (Jane Seymour, actress) â€œLinda and Elvis sitting in bed doing [Monty] Python sketches in shrilt middle-aged womenâ€™s voices was something I found hard to believe. I love this woman. You will too.â€ (Eric Idle, comedian) â€œLinda has led an extraordinary life filled with both blessings and challenges, but she has met them both with grace and kindness.â€ (Roma Downey, actress) â€œFrom Gracelandâ€™s Jungle Room to the beaches of Malibu, my dear friend Linda shares her incredibly interesting and emotional journey, where she never once lost her sense of humor or maiden name.â€ (Kevin Nealon, comedian) â€œOnce in a while a memoir comes along that will change your life. This is not that book, but it is a fascinating inside look at pop-culture history from the nicest, most beautiful woman in the world.â€ (Jon Lovitz, comedian) â€œLinda Thompson has had quite a life, and sheâ€™s quite a woman. She is sweet, gentle, articulate, and loving. Sheâ€™s glamorous, so fun-and sheâ€™s a mom. As her song says, this is all â€˜a little thing called lifeâ€™ but her life was no little thing.â€ (Tony Danza, actor) â€œA funny thing happened on the way to Lindaâ€™s life, namely Elvis, Bruce/Caitlyn, David Foster, and a rock star son. I was mesmerized by the front row seat â€˜behind the curtain.â€™ A must-read!â€ (Sela Ward, actress) â€œLinda is loving, full of spirit, and always makes you feel as if you are the most important person in the room.â€ (Tim Allen, comedian) â€œWords are the voice of the heart, and with Lindaâ€™s Southern grace, she speaks with the tenderness, strength, and resilience of a true Steel Magnolia.â€ (Billy Ray Cyrus, musician) â€œWhat amazes me about Linda goes far beyond her ridiculous talents for writing lyricsâ€“it is that amidst the interesting and seemingly overwhelming and unique life sheâ€™s led, she has remained the same beautiful human being she has always been.â€ (Brooke Shields, actress) About the Author Linda Thompson has been nominated for an Academy Award, a Grammy Award, and won an Emmy Award for writing some of the most recognized songs of a generation. She starred on the long-running hit television series Hee Haw for fifteen years, as well as the rea