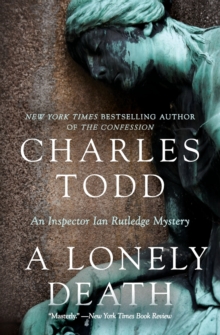 Product Description â€œToddâ€™s Ian Rutledge mysteries are among the most intelligent and affecting being written these days.â€â€”Washington Post Critics have called Charles Toddâ€™s historical mystery series featuring shell-shocked World War One veteran Inspector Ian Rutledge â€œremarkableâ€ (New York Times Book Review), â€œheart-breakingâ€ (Chicago Tribune), â€œfresh and originalâ€ (South Florida Sun-Sentinel). In A Lonely Death, the haunted investigator is back in action, trying to solve the murders of three ex-soldiers in a small English village. A true master of evocative and atmospheric British crime fiction, Charles Todd reaches breathtaking new heights with A Lonely Deathâ€”a thrilling tale of the darkness in menâ€™s souls that will have fans of Elizabeth George, Martha Grimes, and Anne Perry cheering. Â  Review â€œMasterly.â€ (New York Times Book Review on A Lonely Death) â€œTodd once and for all establishes the shell-shocked Rutledge as the genreâ€™s most complex and fascinating detective.â€ (Entertainment Weekly, on A LONELY DEATH (Grade: A-)) â€œ[The authorsâ€™] subtle prose and profound empathy for all their characters enhance a suspenseful and twisty plot.â€ (Publishers Weekly on A Lonely Death) â€œAnother engaging entry in a fine series.â€ (Booklist on A Lonely Death) â€œToddâ€™s intriguing revenge tale will keep the reader turning the pages, but the main draw remains Rutledge, the relentless inspector haunted by the voice of a Scotsman he executed on the battlefield for disobeying an order. Highly recommended for all aficionados of British postwar historical mysteries.â€ (Library Journal on A Lonely Death) â€œEloquently blasts war for the obscenity it is.â€ (Kirkus Reviews on A Lonely Death) â€œToddâ€™s attention to period detail, plotting and character exploration are at the forefront of the 13th Ian Rutledge Mysteryâ€¦.Todd and his hero are in fine form from start to finish.â€ (Romantic Times on A Lonely Death (4 Â½ stars; Top Pick)) â€œA strong entry in a strong series.â€ (Charlotte Observer on A Lonely Death) â€œSuspense filled.â€ (Oklahoman on A Lonely Death) â€œTodd invests this absorbing fiction with creative storytelling (including intriguing subplots), memorable characters and graceful, seemingly effortless proseâ€¦.This is fiction that moves, entertains, and as always, underscores lifeâ€™s victories over death.â€ (Richmond Times-Dispatch on A Lonely Death) From the Back Cover Scotland Yard detective Ian Rutledge returns to solve his most exciting and shocking case yet in this latest entry in the bestselling series hailed as "outstanding" by the New York Times Book Review A breathtaking blend of psychological complexity, haunting atmosphere, compelling twists, and impressive detail, the novels in the Ian Rutledge mystery series have garnered their author widespread acclaim and numerous honors and awards. At the heart of the series is the compelling Scotland Yard detective inspector Ian Rutledge, a veteran of the Great War who understands all too well the darkness that lies within men's souls. Now three men have been murdered in a Sussex village, and Scotland Yard has been called in. It's a baffling case. The victims are soldiers who survived the horrors of World War I only to meet a ghastly end in the quiet English countryside two years later. Each had been garroted, with small ID discs left in their mouths. But even Scotland Yard's presence doesn't deter this vicious and clever killer. Shortly after Inspector Ian Rutledge arrives, a fourth soldier is found dead. With few clues to go on and the pressure building, Rutledge must gamble everythingâ€”his job, his reputation, and even his lifeâ€”to find answers. About the Author Charles Todd is theÂ New York TimesÂ bestselling author of the Inspector Ian Rutledge mysteries, the Bess Crawford mysteries, and two stand-alone novels. A mother-and-son writing team, they live on the East Coast.