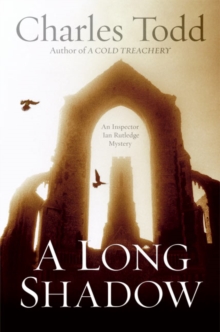 Product Description â€œSeamless in its storytelling and enthralling in its plotting.â€â€”Ft. Lauderdale Sun-Sentinel â€œDark and remarkableâ€¦.Once [Todd] grabs you, thereâ€™s no putting the novel down.â€ â€”Detroit Free Press The Winston-Salem Journal declares that, â€œlike P. D. James and Ruth Rendell, Charles Todd writes novels that transcend genre.â€ A Long Shadow proves that statement true beyond the shadow of a doubt. Once again featuring Toddâ€™s extraordinary protagonist, Scotland Yard investigator and shell-shocked World War One veteran, Inspector Ian Rutledge, A Long Shadow immerses readers in the sights and sounds of post-war Great Britain, as the damaged policeman pursues answers to a constableâ€™s slaying and the three-year-old mystery of a young girlâ€™s disappearance in a tiny Northamptonshire village. Read Toddâ€™s A Long Shadow and see why the Washington Post calls the Rutledge crime novels, â€œone of the best historical series being written today.â€ From Publishers Weekly Starred Review. Set in 1919, Todd's excellent eighth psychological whodunit to feature the insightful but haunted Insp. Ian Rutledge picks up shortly after the harrowing events chronicled in A Cold Treachery (2005). Rutledge travels to the remote and desolate English village of Dudlington after the town constable is shot in the back with an arrow while exploring a forest shunned by the locals. The inspector suspects a connection between the attack and the disappearance of a young girl, but he finds himself in an unfamiliar role when an unknown stalker targets him, leaving ominous clues that indicate that he's vulnerable at all times. Rutledge's fragile psyche comes in for additional battering from an enigmatic woman who claims to be able to contact the dead. Todd's plotting and characterization are, as usual, first-rate, and the tormented motivations behind the novel's dark acts are presented with a sensitivity and refinement reminiscent of the best of P.D. James. The ambiguous ending will leave both longtime fans and new readers anxiously awaiting the sequel. (Jan.) Copyright Â© Reed Business Information, a division of Reed Elsevier Inc. All rights reserved. From School Library Journal Adult/High School-Scotland Yard Inspector Rutledge, a World War I victim of shell shock, is haunted by those he had to send out of the trenches to horrible deaths. His survivor's guilt is manifested in Hamish, whom he was forced to execute for refusing to fight, and whose ghost is his constant companion, always ready to chide, warn, and offer mocking opinions about the task at hand. The eighth in this acclaimed series finds Rutledge in an isolated rural village north of London, charged with bringing to justice the criminal who has gravely wounded its constable, sending an arrow through his chest while he was investigating a murder. And someone is hunting the inspector himself, leaving engraved cartridge casings behind to torment him. Authentic representations of the post-World War I era and an absorbing plot with twists and turns as challenging as the country roads that Rutledge travels make a gripping story. Well-drawn characters and scenes, wry local humor, and plot details steep the mystery in English country life. Frequent scene changes and puzzling dead ends may be a challenge for some teens, but their perseverance will be rewarded. -Molly Connally, Chantilly Regional Library, Fairfax County, VA Copyright Â© Reed Business Information, a division of Reed Elsevier Inc. All rights reserved. From Bookmarks Magazine The real mystery for most critics is how the American mother-and-son team Caroline and Charles Todd, who write under the pseudonym Charles Todd, manage to penetrate so deeply into the postwar English psyche and setting. That insight is the key to the success of the Inspector Rutledge series. While the plots are plenty interesting, it is the deep shade hanging over all Todd?s mysteries that sets them apart. A Long Shadow, the eighth in the series, is no exception,