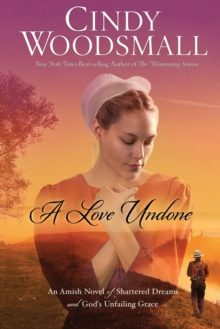 A LOVE UNDONE: AN AMISH NOVEL OF SHATTERED DREAMS AND GOD'S UNFAILING GRACE

Product Description A husband and son abandoned to forge a path alone.A young woman who sacrificed her dreams.How will the God of grace and hope help them find their way?Â  At nineteen years old, Old Order Amish Jolene Keim was on the brink of happily-ever-after when everything changed, stealing the future she expected and burdening her with an unbearable decision. For the next ten years, Jolene throws herself into family lifeâ€”and then she meets Andy Fisher. The horse trainer and father to a sweet nine year-old challenges her and holds up a mirror to issues Jolene has been unwilling to face. Â  Andy is cautious about his deepening friendship with Jolene, but he believes she knows the truth about him â€“ that he is a grass widower. As a man whose wife has abandoned him six years past, he is unable to divorce or remarry according to the Amish ways.Â Andy has wrestled with God concerning his reality, and he had found peace with the solitary future facing himâ€¦until he met Jolene. Â  As Andy and Jolene find themselves confronted by difficult choices, will they trust in God's guidanceâ€”or will the allure of their deepening friendship only lead to further temptation? About the Author Cindy WoodsmallÂ is aÂ  New York Times, CBA, ECPA, andÂ  USA TodayÂ best-selling author who has written over a dozen works of fiction and one of nonfiction book.Â Her connection with the Amish community has been widely featured in national media outlets.Â She's been a finalist for the prestigious Christy, Rita, and Carol Awards, Christian Book of the Year, and Christian Retailers Choice Awards.Â Cindy and her husband reside near the foothills of the North Georgia Mountains. Excerpt. Â© Reprinted by permission. All rights reserved. Chapter 1Rosanna peered out the kitchen window, trying to see through the sheets of rain. What was taking her husband so long? Had the wheels of his rig gotten buried in mud somewhere? After days of hard rain, the ground was saturated. Or was her very social husband simply visiting with his brother, thinking he had more than enough time to get Rosanna to Viola Maeâ€™s house? Rosanna glanced at the clock. Viola Mae had called two hours ago, thinking her labor may have begun. Perhaps it had, but from her experience as a midwife, Rosanna was pretty sure Viola Maeâ€™s first child would take all night and perhaps half of tomorrow before entering this world. And that was if Viola was actually in labor. Nevertheless, the young mom-to-be had to be seen tonight. Rosanna drove herself when the weather was good or even half-decent, but her easygoing, supportive husband insisted on driving her whenever there was snow, fog, or heavy rains. If Rosannaâ€™s examination indicated Viola Mae was in labor, Rosanna would stay the night, and her husband would return home. She wished, and not for the first time, that the Amish in Winter Valley werenâ€™t so cut off from the rest of the world. The serenity of living in northwestern Pennsylvania couldnâ€™t be beat, but there wasnâ€™t a clinic or doctor in the valley, and after her Mamm passed away, Rosanna was the only midwife in the region. When at twenty years old Rosanna had given birth to her first child, her own Mamm had delivered the baby girl, declaring the little one would also become a midwife. That was nineteen years ago, and Jolene was many wonderful things, but a midwife was not one of them. A thud pulled Rosannaâ€™s attention to the happenings in the room. A book had fallen from the kitchen table. Her three schoolage children were sitting around one end of the kitchen table, homework spread out in front of them as Jolene helped. Four-year-old Hope sat at the table with them, but she wasnâ€™t in school yet. She liked homework hour, though, and Jolene had her close to reading and writing already. But the child who required the most help was Ray. After his near-fatal accident three years ago, no one had believed heâ€™d be able to attend school at allâ€”no one except Jolene. Rosannaâ€™s chest tightened with anxiety w