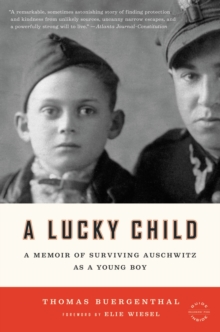 A LUCKY CHILD: A MEMOIR OF SURVIVING AUSCHWITZ AS A YOUNG BOY

Product Description Thomas Buergenthal, now a Judge in the International Court of Justice in The Hague, tells his astonishing experiences as a young boy in his memoir A Lucky Child. He arrived at Auschwitz at age 10 after surviving two ghettos and a labor camp. Separated first from his mother and then his father, Buergenthal managed by his wits and some remarkable strokes of luck to survive on his own. Almost two years after his liberation, Buergenthal was miraculously reunited with his mother and in 1951 arrived in the U.S. to start a new life. Now dedicated to helping those subjected to tyranny throughout the world, Buergenthal writes his story with a simple clarity that highlights the stark details of unimaginable hardship. A Lucky Child is a book that demands to be read by all. Review "In the plainest words and the steadiest tones, Thomas Buergenthal delivers to us the child he once was. History and memory fail to ebb; rather, they accelerate and proliferate, and Buergenthal's voice is now more thunderous than ever. A work of visionary compassion." ? Cynthia Ozick, author of Heir to the Glimmering World "An extraordinary story, simply and beautifully told. Heartbreaking and thrilling, it examines what it means to be human, in every good and awful sense. Thomas Buergenthal remembers and renders the small mysteries and grand passions of childhood, even a childhood lived under the most horrific circumstances." ? Elizabeth McCracken, author of An Exact Replica of a Figment of My Imagination "The unsentimental tone of Buergenthal's writing magnifies his deliberate decision not to make melodrama out of a story that is plenty dramatic enough. Like Primo Levi and Anne Frank, Buergenthal can only tell the story of one life, but through that life we are led to consider and honor all the lives of those who weren't so lucky." ? Kate Braestrup, author of Here If You Need Me "Reminiscent of Anne Frank and Elie Wiesel...Buergenthal [speaks] most eloquently for the millions of Holocaust victims who cannot." ? The Oklahoman "An incredible tale." ? The Free Lance-Star "Buergenthal's authentic, moving tale reveals that his lifelong commitment to human rights sprang from the ashes of Auschwitz." ? Publishers Weekly "Powerful....The author's story is astonishing and moving, and his capacity for forgiveness is remarkably heartening. An important new voice joins the chorus of survivors." ? Kirkus Reviews "A remarkable, sometimes astonishing story of finding protection and kindness from unlikely sources, uncanny narrow escapes and a powerfully strong will to live." ? The Atlanta Journal-Constitution "You think you've heard it all....But this one is different. The clear, nonhectoring prose makes Buergenthal's personal story-and the enduring ethical questions it prompts-the stuff of a fast, gripping read." ? Booklist " A Lucky Child does not wallow in the horrors nor does it shirk the darkest events. It is a clear-headed account of Buergenthal's experiences and how they determined his life."? The Sydney Morning Herald About the Author Considered one of the world's leading international human rights law experts, Thomas Buergenthal served as a judge at the International Court of Justice and prior thereto as judge and president of the Inter-American Court of Human Rights. He is the Lobingier Professor of Comparative Law & Jurisprudence at the George Washington University Law School, and the recipient of the United States Holocaust Memorial Museum's 2015 Elie Wiesel Award.