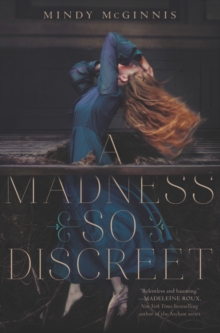 A MADNESS SO DISCREET

Product Description Edgar Award for Best Young Adult Mystery Mindy McGinnis, the acclaimed author of Not a Drop to Drink and In a Handful of Dust, combines murder, madness, and mystery in a beautifully twisted gothic historical thriller perfect for fans of novels such as Asylum and The Diviners as well as television's True Detective and American Horror Story. Grace Mae is already familiar with madness when family secrets and the bulge in her belly send her to an insane asylumâ€”but it is in the darkness that she finds a new lease on life. When a visiting doctor interested in criminal psychology recognizes Grace's brilliant mind beneath her rage, he recruits her as his assistant. Continuing to operate under the cloak of madness at crime scenes allows her to gather clues from bystanders who believe her less than human. Now comfortable in an ethical asylum, Grace finds friendsâ€”and hope. But gruesome nights bring Grace and the doctor into the circle of a killer who will bring her shaky sanity and the demons in her past dangerously close to the surface. From School Library Journal Gr 9 Upâ€”This compelling historical thriller opens with Grace Mae impregnated by her own father and locked away in a horrific asylum, mute and sealed within her own mind. She wishes for death, seeing herself as an empty husk, a vessel only for the life within. When she is pushed too far by the barbarous staff, she reacts violently, leading to the loss of her baby and being sent to die in a basement dungeon. She is discovered by a visiting doctor who sees within Grace the ability to help him in his work solving crime through criminal profiling. Grace is secreted away from Boston to Ohio, where though still in an insane asylum, her life is vastly improved. There she makes friends with a group of realistically complex characters, and assists Dr. Thornhollow in his work. Grace comes to terms with her life, and discovers what she can change, and how to survive that which she cannot. Though she continues to be entrapped in silence most of the time, she manages to make human connections, eventually using them to face her demons. Sympathetic characters make questionable moral choices, perhaps justified by their lack of power to effect change in a direct way. Grace's personal struggles to find her own place and influence her own story mirror the historical struggles of women throughout history. VERDICT Fans of period pieces and crime dramas will be pleased with this haunting tale.â€”Genevieve Feldman, San Francisco Public Library Review â€œMcGinnis excels at rich character development. Grace herself is flawed, complicated, and struggling with intense pain that leads her to some very dark and murky moral places where she asks people to do what may be the wrong thing but for the right reasons. This book is highly recommended.â€ (School Library Journal) â€œA bountiful buffet of twisted, dark intrigue. While others are writing about relatively â€˜normalâ€™ heroes and heroines, McGinnis takes the less-traveled route to bring us a heroine damaged physically and mentally, and to the far reaches of her soul. McGinnis can surely tell a story.â€ ( USA Today) â€œGraceâ€™s story shines. Every person she encounters, mad or trapped by the label of madness, feels achingly real. Readers will wish they could watch her and Thornhollow solve murders for pages and pages more.â€ ( Kirkus Reviews) â€œGraceâ€™s personal struggles to find her own place and influence her own story mirror the historical struggles of women throughout history. Fans of period pieces and crime dramas will be pleased with this haunting tale.â€ (School Library Journal) â€œSeveral storylines are threaded together in this powerful and dark book, examining the line between sanity and insanity and often indicting those who get to define that line. McGinnis extends compassion to the asylumâ€™s most helpless patients as well as the most disturbed and violent characters.â€ (Bulletin of the Center for Childrenâ€™s Books) â€œBrutal, relent