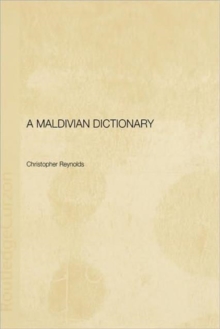 Product Description Maldivian (also known as Divehi) is spoken on the Maldive Islands located off the southwest tip of India in the Indian Ocean. It is an Indo-Aryan language, formerly written in a script resembling Sinhalese script. After the islands became exclusively Islamic, it was found convenient to design a script reading from right to left, so that Arabic words could be accommodated in Maldivian sentences. An official scheme of roman transliteration for Maldivian was adopted by the Maldive government in the 1970s. This Maldivian-English Dictionary consists of 5000 individual entries. Review 'This long-awaited dictionary does not merely fill one of the last lacunae among Indo-Aryan lexicons; it also represents an impressive scholarly achievement, being the outcome of many years of work on Maldivian ... The book is highly recommended both for linguists and Indologists; it will also be helpful for non-professional readers who may need some basic knowledge of the Maldivian language.' - Journal of School of Oriental and African Studies, June 2004 About the Author Christopher Reynolds received his BA degree in 1948 from Oxford University. He was Lecturer in Sinhalese at the School of Oriental and African Studies, University of London, between 1953-87. After spending four months in the capital city of MalÃ©, he made a special study of the Maldivian language (Dihevi) in 1967, before the country was generally open to foreigners.