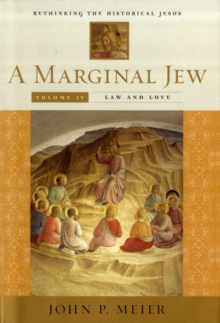 Product Description A leading scholar of the historical Jesus clarifies and illuminates Jesusâ€™ teachings on Jewish law John Meierâ€™s previous volumes in the acclaimed series A Marginal Jew are founded upon the notion that while solid historical information about Jesus is quite limited, people of different faiths can nevertheless arrive at a consensus on fundamental historical facts of his life. In this eagerly anticipated fourth volume in the series, Meier approaches a fresh topicâ€”the teachings of the historical Jesus concerning Mosaic Law and moralityâ€”with the same rigor, thoroughness, accuracy, and insightfulness on display in his earlier works. After correcting misconceptions about Mosaic Law in Jesusâ€™ time, this volume addresses the teachings of Jesus on major legal topics like divorce, oaths, the Sabbath, purity rules, and the various love commandments in the Gospels. What emerges from Meierâ€™s research is a profile of a complicated first-century Palestinian Jew who, far from seeking to abolish the Law, was deeply engaged in debates about its observance. Only by embracing this portrait of the historical Jesus grappling with questions of the Torah do we avoid the common mistake of constructing Christian moral theology under the guise of studying â€œJesus and the Law,â€ the author concludes. Review â€œJohn Meier is the most distinguished Roman Catholic biographer of Jesus.â€?Harold Bloom (Harold Bloom) "John Meier demonstrates, through rigorous textual analysis, Jesus' intimate and profound involvement with Halakhah. This work will profoundly affect the ways Judaism and Christianity understand each other and themselves."?Hindy Najman, Director of the Centre for Jewish Studies, University of Toronto (Hindy Najman) "This definitive work on Jesus and the law displays mastery of the legal heritage of Judaism in clarifying critical issues. Meier's monumental research illuminates long debated issues and resolves a century of debate."?Jacob Neusner, Institute of Advanced Theology, Bard College Â  (Jacob Neusner) "As he turns to the complex, disputed subject of Jesus and the law, John Meier moves systematically, comprehensively, and judiciously through the relevant texts and topics, ever faithful to the criteria that have guided his entire project. All readers stand to benefit from his vast accumulation of material pertinent to the halakhic Jesus and Meier's astonishing control of it."?James VanderKam, University of Notre Dame (James VanderKam) "The quest for the historical Jesus requires the quest for his historical context, late Second Temple Judaism in the land of Israel. With learning both broad and deep, John Meier constructs this context and uncovers therein a prophet and healer and teacher of the Law?an historical Jesus fully incarnate within the Judaism of his time. This is a masterful study and an enduring contribution to scholarship."?Paula Fredriksen, author of From Jesus to Christ,, and Jesus of Nazareth, King of the Jews Â  (Paula Fredriksen) â€œMonumental . . . staggering erudition and thoroughness.â€-- Commonweal ( Commonweal) â€œMeierâ€™s book contains a wealth of useful information, acute observations, and penetrating argument . . . the breadth and depth of Meierâ€™s scholarship call for high admiration.â€--Robert H. Gundry, Books & Culture (Robert H. Gundry Books & Culture) "There is plenty to be gained from the scholarly quest for the historical Jesus, and John Meier's Law and Love is a masterful guide."â€”Jonathan Klawans, Interpretation (Jonathan Klawans Interpretation: A Journal of Bible and Theology) "This engaging study will be of interest to scholars, preachers, and all others interested not only in the historical Jesus but also in Second Temple Jerusalem, the NT, rabbinic literature, and the Church Fathers."--Adele Reinhartz, Catholic Biblical Quarterly (Adele Reinhartz Catholic Biblical Quarterly) "The fourth volume of John P. Meier's A Marginal Jew is, possibly, the m