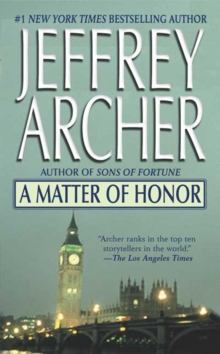 A MATTER OF HONOR

Product Description It seems innocent enough. A disgraced British colonel bequeaths a mysterious letter to his only son. But the moment Adam Scott opens the yellowing envelope, he sets into motion a deadly chain of events that threatens to shake the very foundations of the free world.Within days, Adam's lover is brutally murdered and he's running for his life through the great cities of Europe, pursued not only by the KGB, but by the CIA and his own countrymen as well. Their common intent is to kill him before the truth comes out. While powerful men in smoke-filled rooms plot ever more ingenious means of destroying him, Adam finds himself betrayed and abandoned even by those he holds most dear.When at last he comes to understand what he is in possession of, he's even more determined to protect it, for it's more than a matter of life and death-it's a matter of honor. Review â€œSizzles along at a pace that would peel the paint off a spaceship.â€ ?The New York Times Book Reviewâ€œJeffrey Archer has written the equivalent of an Alfred Hitchcock movie.â€ ?Baltimore Sunâ€œA wild, no-hold-barred slam-bang, pell-mell international thriller.â€ ?Buffalo News About the Author JEFFREY ARCHER was educated at Oxford University. He served five years as a Member of Parliament in the House of Commons and has served twenty-seven years as a Member of the House of Lords. Now published in 97 countries and more than 37 languages, all of his novels and short story collections?including Kane & Abel, Only Time Will Tell and This Was a Man?have been international bestsellers. Jeffrey is married with two sons and three grandchildren, and lives in London, Cambridge and Majorca.