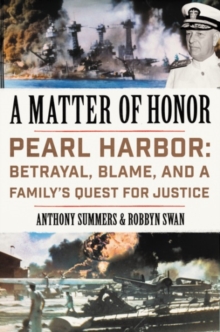 A MATTER OF HONOR: PEARL HARBOR: BETRAYAL, BLAME, AND A FAMILY'S QUEST FOR JUSTICE

Product Description On the seventy-fifth anniversary, the authors of Pulitzer Prize finalist The Eleventh Day unravel the mysteries of Pearl Harbor to expose the scapegoating of the admiral who was in command the day 2,000 Americans died, report on the continuing struggle to restore his lost honorâ€”and clear President Franklin D. Roosevelt of the charge that he knew the attack was coming. The Japanese onslaught on Pearl Harbor on December 7, 1941 devastated Americans and precipitated entry into World War II. In the aftermath, Admiral Husband Kimmel, Commander-in-Chief of the Pacific Fleet, was relieved of command, accused of negligence and dereliction of dutyâ€”publicly disgraced. But the Admiral defended his actions through eight investigations and for the rest of his long life. The evidence against him was less than solid. High military and political officials had failed to provide Kimmel and his Army counterpart with vital intelligence. Later, to hide the biggest U.S. intelligence secret of the day, they covered it up. Following the Admiralâ€™s death, his sonsâ€”both Navy veteransâ€”fought on to clear his name. Now that they in turn are dead, Kimmelâ€™s grandsons continue the struggle. For them, 2016 is a pivotal year. With unprecedented access to documents, diaries and letters, and the familyâ€™s cooperation, Summersâ€™ and Swanâ€™s search for the truth has taken them far beyond the Kimmel storyâ€”to explore claims of duplicity and betrayal in high places in Washington. A Matter of Honor is a provocative story of politics and war, of a man willing to sacrifice himself for his country only to be sacrificed himself. Revelatory and definitive, it is an invaluable contribution to our understanding of this pivotal event. The book includes forty black-and-white photos throughout the text. Review â€œMeticulous, eloquent, and compelling - and hugely readable. The 75th anniversary of the Japanese attack is well served by A Matter of Honor.â€ ( Simon Winchester, New York Times bestselling author of The Men Who United the States and Pacific ) â€œAnthony Summersâ€™ & Robbyn Swanâ€™s A Matter of Honor is a noble and right-minded portrait of Admiral Kimmel, the scapegoat for Pearl Harbor. The amount of fresh research is deeply impressive. Highly recommended!â€ ( Douglas Brinkley, author of Rightful Heritage: Franklin D. Roosevelt & the Land of America) â€œThe most comprehensive, accurate and thoroughly researched book of events leading up to the Japanese attack on Pearl Harbor ever written. It provides new information never before revealed.â€ ( Admiral James Lyons, former Commander in Chief U.S. Pacific Fleet) â€œStreamlined, muscular, objective, and well-written - a sensitive examination of a vast constellation of source material. [Summers and Swan] present a powerful argument in defense of Admiral Kimmel, who was blamed for the attack and forced into inglorious retirement. An excellent book.â€ ( Martin Morgan, World War II historian and author) â€œMeticulous research...thorough-going...provides a great deal of insight into the ordeal of Admiral Husband Kimmel, who served his nation well but was treated shabbily by its leaders.â€ ( Paul Stillwell, author of Battleship Arizona) â€œA fine book. Scrupulously researched and rigorously argued..[a] compellingly told story.â€ ( David M. Kennedy, Pulitzer Prize-winning author of Freedom from Fear: The American People in Depression & War, 1929-1945) From the Back Cover We thought we knew the story well: On December 7, 1941, 2,403 Americans died when Japan attacked Pearl Harbor, devastating the nation and precipitating entry into World War II. In the aftermath, Admiral Husband Kimmel, commander in chief of the Pacific Fleet, was relieved of command, accused of dereliction of duty, and publicly disgraced. The fact was, however, thatâ€”through sheer inefficiencyâ€”the top brass in Washington had failed to provide Kimmel with vital intelligence. Then, in the name of protecting the biggest U.S. intelligence secret of the day, th