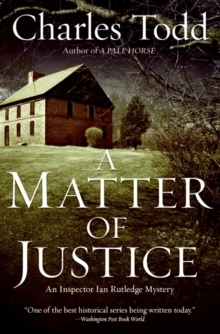 Product Description â€œCharles Todd hasnâ€™t made a misstep yet in his elegant series featuring Scotland Yard detective Ian Rutledge, and A Matter of Justice keeps the streak going.â€â€”Cleveland Plain Dealer Â  The Washington Post calls the Ian Rutledge novels by Charles Todd, â€œone of the best historical series being written today.â€ A Matter of Justiceâ€”the eleventh in the New York Times Notable, EdgarÂ® Award-nominated, and Barry Award-winning seriesâ€”brings back the haunted British police inspector and still shell-shocked World War One veteran in a tale of unspeakable murder in a small English village filled to bursting with dark secrets and worthy suspects. A New York Times bestseller as spellbinding and evocative as the best of Ruth Rendell, Anne Perry, Martha Grimes, and P.D. James, A Matter of Justice represents a new high for this exceptional storyteller. From Publishers Weekly Starred Review. In the stellar 11th Insp. Ian Rutledge mystery (after 2007's A Pale Horse), Todd (the pseudonym of a mother-son writing team) seamlessly combines a fair-play whodunit with a nuanced look into the heart of darkness in the human soul. During the Boer War, Pvt. Harold Quarles takes advantage of a Boer attack on a British military train to enrich himself. When two decades later his battered corpse is found grotesquely displayed at his country residence in Somerset, Scotland Yard's Ian Rutledge must sift through the plethora of lies, omissions and motives surrounding Quarles, who had become a successful investment adviser in London. Because the victim was almost universally despised in Somerset, Rutledge has no shortage of suspects. The inspector's own inner struggles, stemming from his guilt over his morally questionable actions during WWI, make him a more human and complicated protagonist than most other series sleuths. (Jan.) Copyright Â© Reed Business Information, a division of Reed Elsevier Inc. All rights reserved. From Bookmarks Magazine Any good historical novel steeps its reader in the details of a period. But Charles Todd does it with a passionâ€”and through a narrator uniquely qualified to understand human natureâ€”that brings fresh possibilities to the genre. Todd writes with atmospheric charm and a dark psychological edge that makes Rutledge one of crime writing's most compelling recurring characters. Especially intriguing is Rutledge's own coming to terms with his guilt over actions committed in World War I. "Finding a way back had somehow seemed to be a final betrayal," he thinks in A Matter of Justice, as he again questions his own survival. The success of the series hinges on both clever plotting and the nuance with which the authors continue to develop their character. Copyright 2009 Bookmarks Publishing LLC From Booklist Still plagued by memories of the Great War, angst-ridden Scotland Yard inspector Ian Rutledge (along withÂ his conscience and sounding board, the ghost Hamish), returns in a new historical mystery that findsÂ himÂ traveling toÂ a country estate in Somerset.Â His task:Â  investigate the murder of a man well known and respected by the London business community, butÂ universallyÂ disliked by theÂ country townsfolkÂ who know him.Â Pressured by his superior to solve the brutal crime, RutledgeÂ wastes no time digging into the victimâ€™s character. He finds abundant reasonsÂ why people wantÂ the manÂ dead, as well as aÂ few people who are surprisingly eager to take the blame.Â The problem is that RutledgeÂ wantsÂ more than strong emotion. He wants facts,Â and those donâ€™t come on a timetable. Memories of Rutledgeâ€™s traumatic wartime experiences add texture to this character-driven novel, which pivots on greed, shame, anger, andÂ the quest for vengeance.Â Readers need not be familiar with Rutledgeâ€™s previous adventures to appreciate this one, another smoothly constructed, literaryÂ endeavor put togetherÂ by a mother-and-son writing team. --Stephanie Zvirin Review â€œThereâ€™s no end to war in Charles Toddâ€™s unnervingly beautiful h