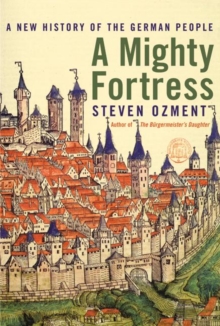 A MIGHTY FORTRESS: A NEW HISTORY OF THE GERMAN PEOPLE

Product Description The word "German" was being used by the Romans as early as the midâ€“first century B.C. to describe tribes in the eastern Rhine valley. Nearly two thousand years later, the richness and complexity of German history have faded beneath the long shadow of the country's darkest hour in World War II. Now award-winning historian Steven Ozment, whom the New Yorker has hailed as "a splendidly readable scholar," gives us the fullest portrait possible in this sweeping, original, and provocative history of the German people, from antiquity to the present, holding a mirror up to an entire civilization -- one that has been alternately Western Europe's most successful and most perilous. A Mighty Fortress boldly examines Germany's tumultuous twentieth century in light of its earliest achievements as a prosperous, civil, and moral society, tracing a line of continuity that began in ancient times and has endured through the ages, despite its enemies and itself. Ozment's story takes us from the tribes of the Roman Empire and the medieval dynasties to the fall of the Berlin Wall and reunification. He shows that the Germans are a people who desire national unity yet have kept themselves from it by aligning with autocratic territorial governments and regional cultures. From Luther, Kant, Goethe, and Beethoven to Marx, Einstein, Bismarck, and Hitler, the country's leading figures have always tried to become everything and more than what ordinary mortals could be. In fact, Germans living centuries apart have shared in different ways a common defining experience that is unique to their culture: a convergence of external provocation and wounded pride, and an unusual ability to exercise great power in response to both. In this work of penetrating, virtuoso scholarship, Steven Ozment captures the soul of a nation that is at once ordered and chaotic, disciplined and obsessive, proud and uncertain. Epic in scope, refreshing in its insights, and written with nuance, acumen, and verve, A Mighty Fortress presents the history of the Germans as the story of humanity writ large. From Publishers Weekly It takes erudition and verve to attempt a history that covers the life of a controversial people over two millennia. Harvard historian Ozment has plenty of both, yet the result is oddly unsatisfactory. Ozment (The Burgermeister's Daughter, etc.) quickly and wisely dismisses any notion that a history of Germany must be focused on the Third Reich. Instead, the travails of political disunity serve as his narrative anchor. Neither the ancient Germanic tribes nor their medieval and early modern successors could forge any long-lasting unity. Only under Bismarck did a unified political entity emerge, and it soon succumbed to visions of grandeur that resulted in two world wars and a Holocaust, renewed territorial losses and political divisions. Ozment's focus on disunity provides narrative coherence to a long, contentious and complex history, but the costs are huge. Particularly the early chapters read like "one damned thing after another" as a succession of tribal leaders, princes, kings and emperors march across the pages. So many important issues that might grasp a reader's interest are left out. There is nary a mention of economics, legal and social practices among the Germanic tribes, of women and working life. When discussing the Nazi worldview, the author has an unfortunate tendency to equate Jews and Christians as Nazi targets. It is certainly true that the Nazis were deeply anti-Christian, but the Jews were singled out for total physical annihilation. Ultimately, Ozment does not provide a history of the German people, but a tale of their rulers and a few leading intellectuals. 8 pages of b&w photos, maps not seen by PW. Copyright Â© Reed Business Information, a division of Reed Elsevier Inc. All rights reserved. From Booklist Like a moth to a flame, those who write general histories of Germany are drawn to the era of National Socialism.