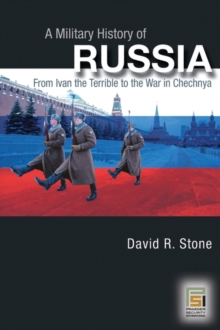 A MILITARY HISTORY OF RUSSIA: FROM IVAN THE TERRIBLE TO THE WAR IN CHECHNYA

This book brings to light Russia's undeservedly-obscure military past, rectifying the tendency of American and Western military historians to neglect the Russian side of things. Russia, as both a Western and non-Western society, challenges our thinking about Western military superiority. Russia has always struggled with backwardness in comparison with more developed powers, at some times more successfully than others. The imperatives of survival in a competitive international environment have, moreover, produced in Russian society a high degree of militarization. While including operational and tactical detail that appeals to military history enthusiasts, this book simultaneously integrates military history into the broader themes of Russian history and draws comparisons to developments in Europe. The book also challenges old assumptions about the Russian military. Russian military history cannot be summed up simply in a single stock phrase, whether perennial incompetence or success only through stolid, stoic defense; it also shows numerous examples of striking offensive successes.

Stone traces Russia's fascinating military history, and its long struggle to master Western military technology without Western social and political institutions. It covers the military dimensions of the emergence of Muscovy, the disastrous reign of Ivan the Terrible, and the subsequent creation of the new Romanov dynasty. It deals with Russia's emergence as a great power under Peter the Great and culminating in the defeat of Napoleon. After that triumph, the book argues, Russia's social and economic stagnation undermined its enormous military power and brought catastrophic defeat in the Crimean War. The book then covers imperial Russia's long struggle to reform its military machine, with mixed results in the Russo-Japanese War and World War I. The Russian Revolution created a new Soviet Russia, but this book shows the continuity across that divide. The Soviet Union's inte