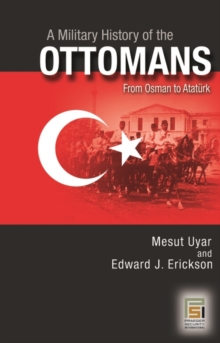 A MILITARY HISTORY OF THE OTTOMANS: FROM OSMAN TO ATATüRK (PRAEGER SECURITY INTERNATIONAL)

The Ottoman Army had a significant effect on the history of the modern world and particularly on that of the Middle East and Europe. This study, written by a Turkish and an American scholar, is a revision and corrective to western accounts because it is based on Turkish interpretations, rather than European interpretations, of events. As the world's dominant military machine from 1300 to the mid-1700's, the Ottoman Army led the way in military institutions, organizational structures, technology, and tactics. In decline thereafter, it nevertheless remained a considerable force to be counted in the balance of power through 1918. From its nomadic origins, it underwent revolutions in military affairs as well as several transformations which enabled it to compete on favorable terms with the best of armies of the day. This study tracks the growth of the Ottoman Army as a professional institution from the perspective of the Ottomans themselves, by using previously untapped Ottoman source materials. Additionally, the impact of important commanders and the role of politics, as these affected the army, are examined. The study concludes with the Ottoman legacy and its effect on the Republic and modern Turkish Army.

This is a study survey that combines an introductory view of this subject with fresh and original reference-level information. Divided into distinct periods, Uyar and Erickson open with a brief overview of the establishment of the Ottoman Empire and the military systems that shaped the early military patterns. The Ottoman army emerged forcefully in 1453 during the siege of Constantinople and became a dominant social and political force for nearly two hundred years following Mehmed's capture of the city. When the army began to show signs of decay during the mid-seventeenth century, successive Sultans actively sought to transform the institution that protected their power. The reforms and transformations that began frist in 1606successfully preserved t