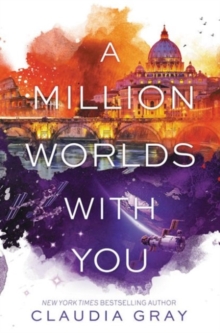 A MILLION WORLDS WITH YOU (FIREBIRD)

Product Description The fate of the multiverse rests in Margueriteâ€™s hands in the final installment of the Firebird trilogy by New York Times bestselling author Claudia Gray. Ever since she used the Firebird, her parentâ€™s invention, to cross through alternate dimensions, Marguerite has been at the center of a cross-dimensional feud. Now she has learned that the evil Triad Corporation plans to destroy hundreds of universes, using their ultimate weapon: another dimensionâ€™s Marguerite who is wicked, psychologically twisted, and always one step ahead. Even though her boyfriend Paul has always been at Margueriteâ€™s side, the Triadâ€™s last attack has left him a changed man, and he may never be the same again. Marguerite alone must stop Triad and prevent the destruction of the multiverse. Itâ€™s a battle of the Marguerites . . . and only one can win. In the epic conclusion to the sweeping series that kicked off with A Thousand Pieces of You,Â fate and family will be questioned, loves will be won and lost, and the multiverse will be forever changed. From School Library Journal Gr 9 Upâ€”In the thrilling conclusion to the trilogy, Marguerite Caine is in the middle of a cross-dimensional fight to save multiple universes from extinction. With the Firebird device that her parents created, Marguerite can travel among universes. However, she is becoming aware of the impact that traveling has on each dimensionâ€”and on herself. In a culmination of events begun in the previous volumes, Marguerite has discovered the evil plans of the Triad Corporation and is trying to catch those involved before destruction occurs. Paul, Marguerite's friend and love interest, has changed since his soul split in four, and he struggles with his dark side, pushing Marguerite away while also trying to assist her across the multiverse. With fast-paced action that starts from the first chapter, this title will draw readers into an enthralling chase across time and space. The plot cleverly connects many universes with multiple dimensions of personality, and the characters are intriguing, smart, layered, and independent. Although this offering can be read as a stand-alone, those who haven't read the first two novels will lack important context. VERDICT Sci-fi fans are the obvious audience for this, but readers of all genres will enjoy the nonstop action and unique story.â€”Melissa Poole, Clemson University Library, Anderson, SC Review â€œAn enthralling chase across time and space.â€ (School Library Journal) Praise for the Firebird series: â€œPlenty of suspense and danger, and a cliff-hanger ending add to the storyâ€™s appeal.â€ (School Library Journal) Praise for the Firebird series: â€œA fun romance with a plucky main character and a dramatic cliff-hanger ending.â€ ( Booklist) Praise for the Firebird series: â€œActionâ€“packedâ€¦.Gray effortlessly moves between the SF, historical, and contemporary aspects of her story.â€ ( Publishers Weekly) Praise for the Firebird series: â€œThis unique science fiction adventure is full of twists, turns, and surprises.â€ ( Booklist) Praise for the Firebird series: â€œThis wellâ€“blended mix of adventure, sciâ€“fi, and romance will appeal to a wide audience.â€ (School Library Journal) Praise for the Firebird series: â€œWith on the edge of your seat mystery and suspense, this thrilling fantasy will keep you guessing until the end.â€ (# 1 New York Times bestselling author Jennifer L. Armentrout) Praise for the Firebird series: â€œDeeply imaginative and totally enthralling. I loved the multiplicity of worlds and characters. A Thousand Pieces of You is epic!â€ (New York Times bestselling author Lauren Oliver) About the Author Claudia Gray is the pseudonym of New Orleans-based writer Amy Vincent, the author of the New York Times bestselling Evernight series. She has worked as a lawyer, a journalist, a disc jockey, and an extremely poor waitress. Her grandparents' copy of Mysteries of the Unexplained is probably the genesis of her fascination with most things mys