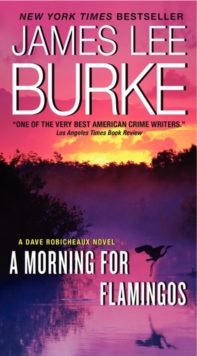 A MORNING FOR FLAMINGOS: A DAVE ROBICHEAUX NOVEL

Product Description A Morning for Flamingos is a classic Dave Robicheaux Louisiana mystery by New York Times bestselling author James Lee Burke.Â Desperately holding together the pieces of his shattered life, Cajun detective Dave Robicheaux has rejoined the New Iberia police force. While transporting two death-row prisoners, Dave is wounded, his partner is killed. Now heâ€™s trailing a killer into the heart of the Big Easyâ€™s underworld. Embroiled in a world of drug dealers, prostitutes, and double-crosses, Robicheaux is forced to confront his most dangerous enemy: himself.Â Absorbing and masterfully executed, A Morning for Flamingos is one of Edgar Awardâ€“winning author James Lee Burkeâ€™s most enduring southern crime novels.Â  Review â€œNo one writes better detective novels. . .A creator of muscular, violent, headlong stories that honor and at the same time expand conventions of the form. . .Truly astonishing.â€ -- Washington Post Book World â€œThe plotting is intricate and the action is robust. . .Burke creates rich, complicated characters and treats them with tremendous compassion. And he fashions passages of prose as haunting as any writer at work in America today.â€ -- New Orleans Times-Picayune â€œAs elegant and moody as a New Orleans night.â€ -- Toronto Globe and Mail â€œFor grand escape, get your hands on A MORNING FOR FLAMINGOS. Burke is one of the most polished mystery novelists alive; his hero, Cajun detective Dave Robicheaux, is as ripe and as real as they get. . .The man can write.â€ -- Boston Globe From the Back Cover Clutching the shards of his shattered life, Cajun detective Dave Robicheaux has rejoined the New lberia police force. His partner is deadâ€”slain during a condemned prisoner's bloody flight to freedom that left Robicheaux critically wounded . . . and reawakened the ghost of his haunted, violent past. Now he's trailing a killer into the sordid heat of the Big Easy, caught up in the lethal undercurrents of a mob double-cross as he confronts his most dangerous enemyâ€”himself . . . About the Author James Lee Burke is the author of nineteen novels, including eleven starring the Detective Dave Robicheaux. Burke grew up on the Texas-Louisiana Gulf Coast, where he now lives with his wife, Pearl, and spends several months of the year in Montana.