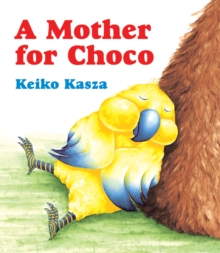 A MOTHER FOR CHOCO

by: Kasza, Keiko
Format: Board book

Product Description Family is about love no matter how different parents and children may be, adopted or not. Choco wishes he had a mother, but who could she be? He sets off to find her, asking all kinds of animals, but he doesn't meet anyone who looks just like him. He doesn't even think of asking Mrs. Bear if she's his mother-but then she starts to do just the things a mommy might do. And when she brings him home, he meets her other children-a piglet, a hippo, and an alligator-and learns that families can come in all shapes and sizes and still fit together. Keiko Kasza's twist on the "Are you my mother?" theme has become one of the most highly recommended stories about adoption for children. Â  Review "The message is warm and reassuring, particularly to adoptees, stepkids, and other children who for various reasons don't resemble their caretakers." -- The Bulletin of the Center for Children's Books "Just right for the preschool group or beginning reader." -- Kirkus Reviews, starred review "Cheerful, energetic . . . An excellent choice for storytime." -- School Library Journal, starred review "A profound message, endearingly and subtly delivered. An ideal choice for adopted or foster children." -- Publishers Weekly About the Author Keiko Kasza was born on a small Japanese island in the Inland Sea of Japan. She grew up in a typical Japanese extended family with her parents, two brothers, and grandparents. Uncles, aunts, and cousins also lived nearby. "All the steps I took growing up were very normal," Ms. Kasza says. "The only unusual thing I did was go to college in the United States." She graduated with a degree in graphic design from California State University at Northridge. Ms. Kasza married an American, and the United States has been her home ever since. After publishing five children's books in Japan and working as a graphic designer for fourteen years, Ms. Kasza decided in 1988 to devote her time to picture books. She says, "Having two small boys and two professions was too much to handle." Ms. Kasza admires many great picture-book creators, such as Leo Lionni and Maurice Sendak, but says that the work of Arnold Lobel has influenced her the most. The subtle humor and warmth he created in his books continues to inspire me," she says. "I often go back to his work when I get discouraged or lose confidence." Ms. Kasza compares the process of making a book to acting on stage under the lights:"I become the character that I'm working on at that moment. I pretend that I'm a bird looking for a mother, or a pig trying to impress his girlfriend. When I'm acting, I'm a child myself." Ms. Kasza's ambition is not to create a hundred books, but to "create one really good book that will be kept on the family bookshelves for generations, although a hundred really good books would be even better, of course!" Keiko Kasza lives in Indiana with her husband and two sons. copyright Â© 2000 by Penguin Putnam Books for Young Readers. All rights reserved.