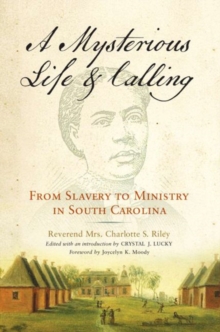 A MYSTERIOUS LIFE AND CALLING: FROM SLAVERY TO MINISTRY IN SOUTH CAROLINA (WISCONSIN STUDIES IN AUTOBIOGRAPHY)

Product Description Preacher, teacher, and postmistress, Charlotte Levy Riley was born into slavery but became a popular evangelist after emancipation. Although several nineteenth-century accounts by black preaching women in the northern states are known, this is the first discovery of such a memoir in the South. Â Â Â Â Â Â Â Â Â Â Â  Born in 1839 in Charleston, South Carolina, Riley was taught to read, write, and sew despite laws forbidding black literacy. Raised a Presbyterian, she writes of her conversion at age fourteen to the African Methodist Episcopal (AME) church, embracing its ecstatic worship and led by her own spiritual visions. Her memoir is revelatory on many counts, including life in urban Charleston before and after emancipation, her work as a preacher at multiracial revivals, the rise of African American civil servants in the Reconstruction era, and her education and development as a licensed female minister in a patriarchal church. Â Â Â Â Â Â Â Â Â Â Â  Crystal J. Lucky, who discovered Rileyâ€™s forgotten book in the library archives at Wilberforce University in Ohio, provides an introduction and notes on events, society, and religious practice in the antebellum era and during the Civil War and Reconstruction, and places A Mysterious Life and Calling in the context of other spiritual autobiographies and slave narratives. Review â€œ A Mysterious Life and Calling shifts and revises what we thought we knew about black (womenâ€™s) autobiography, antebellum autobiography, spiritual and conversion texts, slavery narratives, and South Carolina history.â€ â€”Joycelyn Moody, from the foreword â€œRileyâ€™s autobiography is a genuine discovery in areas that are being widely read and taught: womenâ€™s spiritual autobiography, African American autobiography, and the history of the slave narrative in North America. This is an extraordinary contribution to American letters.â€â€”William L. Andrews, series editor â€œ[Crystal] Lucky has truly uncovered a gem with this autobiography of Charlotte S. Riley, a former slave who became a reverend in the African Methodist Episcopal church after emancipation. . . . An important, informative achievement.â€â€” Publishers Weekly From the Publisher Wisconsin Studies in Autobiography William L. Andrews, Series Editor About the Author Crystal J. Lucky is associate professor of English and director of the Africana Studies Program at Villanova University. She is also an ordained elder and official in the Church of the Living God International.