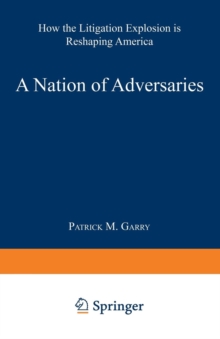 A NATION OF ADVERSARIES: HOW THE LITIGATION EXPLOSION IS RESHAPING AMERICA

Product Description A book on a timely and powerful theme....While others have documented the damage that litigation does to our economy, Garry wants to show us its cost to our character as a nation. -- Walter Olson, Author, The Litigation Explosion Throughout our history, America has been shaped by a series of transforming events and institutions -- the Pilgrims' Puritanism, the promise of Jacksonian democracy, the staggering rise of corporate capitalism, and the advent of electronic media. Today, a new strain of litigious behavior veers our culture away from the proverbial melting pot to one in which fellow citizens become bitter adversaries. Law is becoming the next American frontier where litigious pioneers try to stake out new opportunities for wealth and fame. A Nation of Adversaries brilliantly examines how the litigation explosion has singed our culture by needlessly crowding courthouses and fueling the growth of the lawyer population. Dr. Patrick Garry, an expert on the effect of the courts on American society, insightfully points out how our increasingly litigant-oriented mindset is reinforcing a self-centered culture of undue expectation and entitlement. He offers a blistering look at litigation's invasion into our once formally mindful society. Anyone interested in new trends of human behavior, as well as professionals in sociology, the legal profession, behavior therapy, and clinical psychology, will find this a shrewd commentary on the creation of a new culture of identity in America. From Booklist Legal and constitutional scholar Garry examines America's adversarial culture. Far too many of us, he argues, are always on the lookout for some actionable offense no matter how minor. As a nation, we feel ourselves entitled to whatever settlement we can wrest from a plaintiff because of a growing sense of victimhood. We figure we are owed. America's declining social and personal values are one factor here, although Garry also documents a legal profession bent on litigation because it is so lucrative. He also lays blame on a media apparatus that treats court cases like sporting events, where the point isn't truth but who's winning. Depressingly accurate, although one wonders why Garry's analysis left out some very central players: corporations and organizations that won't do the right thing, making litigation or the threat of it about the only way to achieve some sort of justice. Brian McCombie About the Author Patrick M. Garry, Ph.D., J.D., has taught at St. John's University and the University of Minnesota, and has been a visiting scholar at the Columbia University School of Law.