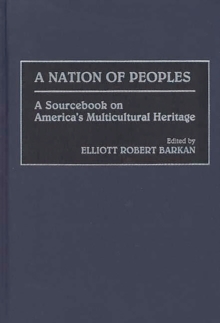 A NATION OF PEOPLES: A SOURCEBOOK ON AMERICA'S MULTICULTURAL HERITAGE

The debate over America's multiculturalism has been intense for nearly three decades, dividing opponents into those insisting on such recognition and those fearing that such a formal acknowledgment will undermine the civic bonds created by a heterogeneous nation. Facts have often been the victim in this dispute, and few works have successfully attempted to present the broad spectrum of America's ethnic groups in a format that is readable, current, and authoritative. The chapters in this reference book demonstrate that America has been far more than a nation of immigrants; it has been a nation of peoples?of virtually all races, religions, and nationalities?inclusive of indigenous natives and peoples long present as well as myriad immigrant and refugee groups. Not all groups have equally found America to be a land of opportunity, and the successes of some groups have come at the expense of others. To understand the American experience, the reader must not just study the story of immigrants living on the East Coast, but also the history of those living in the South, Southwest, West, and even Alaska and Hawaii.

As a reference book, this volume provides thorough coverage of more than two dozen racial, ethnic, and religious groups in the United States. Each chapter is written by an expert contributor and overviews the experiences of one group or a cluster of related groups. The chapters are arranged alphabetically and cover groups such as African Americans, American Indians, Filipinos, Hawaiians, Mexicans, Mormons, and Puerto Ricans. To the extent possible, each chapter discusses the initial arrival of the group in America; the adaptation of the first generation of immigrants; the economic, political, and cultural integration of the group; and the status of the group in contemporary American society. Each chapter closes with a bibliographical essay, and the volume concludes with a review of the most important general works on America's multicultural herita