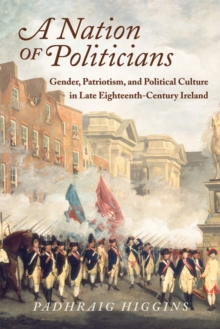 A NATION OF POLITICIANS: GENDER, PATRIOTISM, AND POLITICAL CULTURE IN LATE EIGHTEENTH-CENTURY IRELAND (HISTORY OF IRELAND & THE IRISH DIASPORA)

Product Description Between the years 1778 and 1784, groups that had previously been excluded from the Irish political sphereâ€”women, Catholics, lower-class Protestants, farmers, shopkeepers, and other members of the laboring and agrarian classesâ€”began to imagine themselves as civil subjects with a stake in matters of the state. This politicization of non-elites was largely driven by the Volunteers, a local militia force that emerged in Ireland as British troops were called away to the American War of Independence. With remarkable speed, the Volunteers challenged central features of British imperial rule over Ireland and helped citizens express a new Irish national identity. Â Â Â  In A Nation of Politicians, Padhraig Higgins argues that the development of Volunteer-initiated activitiesâ€”associating, petitioning, subscribing, shopping, and attending celebrationsâ€”expanded the scope of political participation. Using a wide range of literary, archival, and visual sources, Higgins examines how ubiquitous forms of communicationâ€”sermons, songs and ballads, handbills, toasts, graffiti, theater, rumors, and gossipâ€”encouraged ordinary Irish citizens to engage in the politics of a more inclusive society and consider the broader questions of civil liberties and the British Empire. A Nation of Politicians presents a fascinating tale of the beginnings of Irelandâ€™s richly vocal political tradition at this important intersection of cultural, intellectual, social, and public history. Â  Â  Winner of the Donald Murphy Prize for Distinguished First Book, American Conference for Irish Studies Review â€œA mature work, clearly the product of years of thinking and re-thinking. It is the first convincing attempt to relate the subjects of gender, consumerism, and material culture to late eighteenth-century Ireland.â€â€”Ian McBride, Kingâ€™s College, London â€œWhile there has been a surge of books on the 1790s in Ireland, there are precious few on the 1780s andâ€”remarkablyâ€”nothing recent on the Volunteers. This book is timely and will fill an obvious gap.â€â€”Kevin Whelan, Keough Naughton Notre Dame Centre, Dublin â€œThis book should be read by everyone interested in the history of Ireland in the late eighteenth century . . . the text represents a methodological and conceptual step forward in its integration of traditional and new sources (particularly those of a visual and material nature) that many others will seek to follow.â€ â€”James Kelly, Irish Economic and Social History â€œThis ground-breaking book thoroughly examines the experience of political culture during this rage militaire, which gripped Ireland from 1779 to 1784, when the American War of Independence plunged Britain into imperial crisis. Not a linear-chronological narrative of the Volunteers, it fills a considerable gap in our understanding of the processes of the politicization that they engendered and various societal implications. Higgins adopts an innovative approach that reflects the cultural turn in history and also addresses gender identity, employing imaginative, if often densely worded, language. A rich teaching resource, this book will eruditely expose undergraduates to concepts such as â€˜alehouse politiciansâ€™ and â€˜petticoat governmentâ€™, breathing life into the past while challenging them to pursue further research by delving into the predictable but varied sources informing Higginsâ€™s discussion.â€â€”Sylvie Kleinman, History Ireland â€œHiggins demonstrates the vitality of the period and a new type of politics that turned the world upside down . . . the novelty of Higginsâ€™s methodology and perspective have established a new standard and a challenge to the historians of the 1780s." â€”Daire Keogh, Journal of British Studies â€œIn keeping with the â€˜new cultural historyâ€™ the real strength of this richly textured study lies in the careful analysis of the meanings and significance of political ritual and rhetoric. In doing so, it not only offers a persuasive reappraisal of the Volun