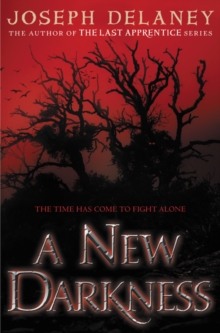 Product Description The first book in a chilling new trilogy from the author of the internationally bestselling Last Apprentice series! Tom Ward is an apprentice no longerâ€”he is a full-fledged spook battling boggarts, witches, and other creatures of the dark. A New Darkness is the first in a three-book arc that introduces brand-new readers to Joseph Delaney's haunting world. Tom Ward is the Spook, the one person who can defend the county from bloodthirsty creatures of the dark. But he's only seventeen, and his apprenticeship was cut short when his master died in battle. No one trusts Tom's skill, not until he's proven himself. And a fifteen-year-old girl named Jenny knows more about the three mysterious deaths in the county than Tom does. She is a seventh daughter of a seventh daughter, and she wants to be Tom's first apprenticeâ€”even though a female spook is unheard of. Together, Tom and Jenny will uncover the grave danger heading straight toward the county, and they'll team up with a witch assassin to confront it. A New Darkness begins a three-book arc that will introduce new readers to Joseph Delaney's deliciously scary imagination, and electrify his longtime fans. A New Darkness is perfect for every reader who loves thrills, chills, action, and adventureâ€”no prior knowledge of The Last Apprentice series is necessary! The Last Apprentice series, the first internationally bestselling series about Tom Ward, is now a major motion picture, Seventh Son, starring Jeff Bridges, Ben Barnes, Alicia Vikander, Kit Harington, Olivia Williams, Antje Traue, Djimon Hounsou, and Julianne Moore as Mother Malkin. From School Library Journal Gr 8 Upâ€”The tale of Tom Ward from "The Last Apprentice" series (HarperCollins) continues. At 17, Tom is no longer an apprentice, but the Chipenden Spook after the death of his master. As a Spook, Tom's job is to protect his territory from ghosts, ghasts, boggarts, witches, and any other beasties that threaten the villagers. Reluctantly, he takes on his own apprentice, a seventh daughter of a seventh daughter, named Jenny. Jenny and Tom encounter a formidable new threat, the Kobalos. The Spook calls on his alliance with the witch, Grimalkin. Together, the three travel north to watch the spectacle of Kauspetnd, a deadly Kobalos assassin who has been challenging human champions to a fight to the death and always wins. The trio hopes to find out more about the Kobalos, but little does Tom know that Grimalkin has a much bigger plan. A plethora of action involving ghastly creatures, sword fights, and magic coupled with just enough backstory and description make this novel engaging enough to keep even the most reluctant reader turning pages until the end. Tom's story has a doozy of a cliff-hanger that is sure to bring teens back for more. Delaney fans and new readers are sure to enjoy this first book of a planned trilogy.â€”Mindy Whipple, West Jordan Library, UT Review â€œDelaneyâ€™s narrative . . . starts slow, but horrific scenes of grotesque monsters and the threat of danger gradually seep through and heighten the tension all the way up to the cliff-hanger ending. Fans of the Last Apprentice series will be happy to see Tom at work again.â€ ( Booklist) â€œThe first book in a new trilogy featuring a main character from the popular series The Last Apprentice. Fans of the series will enjoy this look at Tomâ€™s work as a Spook, but readers fresh to his story will find it equally engagingâ€¦Ends on an eerie cliff-hangerâ€ (Voice of Youth Advocates (VOYA)) â€œThis first novel of an anticipated trilogy builds from the narrative arc of the extensive Last Apprentice series . . . Terrifying . . . and mesmerizing . . . readers will absolutely be swept quickly into this world.â€ (Bulletin of the Center for Childrenâ€™s Books) From the Back Cover Something is terrorizing the villages of the county. People are dyingâ€”covered in blood, their faces frozen in fear. But with not a wound on their bodies. Battling creatures of the dark