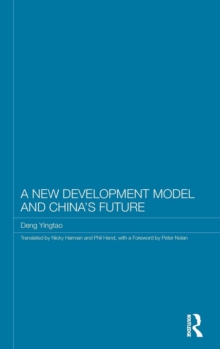 Product Description The need for China to find a new, environmentally sustainable development path is accepted widely among Chinese scholars and policy makers. This book makes available for the first time to an Englishâ€“speaking audience Deng Yingtao's ground-breaking book New Development Model and Chinaâ€™s Future. Published in 1991, the book was far ahead of its time. Deng subjects the development model of the high income countries to rigorous analysis and explores the environmental implications of China following this model. His clear conclusion is that the carrying capacity of the physical environment and nature is limited, that economic and social development should not exceed the carrying capacity of resources, and that China should not adopt the western development path. Based on insights from economics, engineering and human psychology, the book analyses the environmental impact of the current western development model, demonstrates the catastrophic impact this would have in terms of China's own development and in terms of China's relationship with the world, and argues that China's rich intellectual and scientific tradition will allow Chinese people to play a central role in finding the solution to the profound environmental and development challenges the world currently faces. About the Author Deng Yingtao was Director of the Economics and Cultural Research Centre of the Chinese Academy of Social Sciences. Nicky Harman is the translator of the text.Â Dr HarmanÂ used to lecture at Imperial College London, UKÂ and now works full-time as a literary translator. Peter Nolan, DirectorÂ of theÂ Centre of Development Studies, University of Cambridge, UK, wrote the foreword. Phil Hand is the translator of the Afterword. He studied Chinese and linguistics at Cambridge, interpreting at Shanghai International Studies University and translation at Birmingham. He specialises in translating social science research.