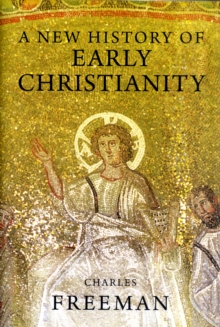 A NEW HISTORY OF EARLY CHRISTIANITY

Product Description The relevance of Christianity is as hotly contested today as it has ever been. A New History of Early Christianity shows how our current debates are rooted in the many controversies surrounding the birth of the religion and the earliest attempts to resolve them. Charles Freemanâ€™s meticulous historical account of Christianity from its birth in Judaea in the first century A.D. to the emergence of Western and Eastern churches by A.D. 600 reveals that it was a distinctive, vibrant, and incredibly diverse movement brought into order at the cost of intellectual and spiritual vitality. Against the conventional narrative of the inevitable â€œtriumphâ€ of a single distinct Christianity, Freeman shows that there was a host of competing Christianities, many of which had as much claim to authenticity as those that eventually dominated. Looking with fresh eyes at the historical record, Freeman explores the ambiguities and contradictions that underlay Christian theology and the unavoidable compromises enforced in the name of doctrine. Tracing the astonishing transformation that the early Christian church underwentâ€”from sporadic niches of Christian communities surviving in the wake of a horrific crucifixion to sanctioned alliance with the stateâ€”Charles Freeman shows how freedom of thought was curtailed by the development of the concept of faith. The imposition of "correct belief," religious uniformity, and an institutional framework that enforced orthodoxy were both consolidating and stifling. Uncovering the difficulties in establishing the Christian church, he examines its relationship with Judaism, Gnosticism, Greek philosophy and Greco-Roman society, and he offers dramatic new accounts of Paul, the resurrection, and the church fathers and emperors. Review " A History of Early Christianity is a masterful book, and a pleasure to read. Freeman narrates the development, diversity, and spread of Christianity with originality and verve. It is a story that brims over with fascinating accounts, intriguing quotations from figures in the ancient Mediterranean, and illuminating historical analysis. It is also a crucial resource for our understanding of ongoing cultural negotiations of religious and political spheres, all those theologico-political paradoxes that face us now more than ever. I do not think there exists a more engaging and illuminating history of early Christianity than this one."â€”Ward Blanton, University of Glasgow (Ward Blanton) "Even those who are adherents to Christianity may be puzzled by the tensions which exist in its primary sources, and this meticulous attempt to probe its origins and development is to be welcomed. Charles Freeman embraces the different kinds of approaches and positions which are found in the ancient texts, Christian and otherwise, painting a vivid picture of the nature of Christianity in all its diversity in the earliest centuries of its existence."â€”Christopher Rowland, author of Christian Origins (Christopher Rowland) "This is a bold and imaginative historical synthesis which fills an important need. For the first time, Freeman makes the complex story of Christianity's birth and early development available in concise, lively, eminently readable form. A tragic story in many ways, but a great pleasure to read."â€”Richard Rubenstein, author of When Jesus Became God (Richard Rubenstein) "[Freeman] surveys a surprisingly diverse range of early Christian communities, . . . [and] recounts how small and politically marginal bands of Christians. . . transformed into an imperially powerful church serving Roman emperors (notably, Constantine and Theodosius) and persecuting heretics unwilling to embrace the creeds those emperors helped to hammer out."â€”Bryce Christensen, Booklist (Bryce Christensen Booklist 2009-10-01) "A fresh and provocative book: insightful, adventurous and controversial."â€”Laurie Guy, Colloquium (Laurie Guy Colloquium) "This book combines clear de