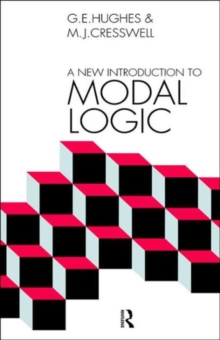 A NEW INTRODUCTION TO MODAL LOGIC

Product description This long-awaited book replaces Hughes and Cresswell's two classic studies of modal logic: An Introduction to Modal Logic and A Companion to Modal Logic. A New Introduction to Modal Logic is an entirely new work, completely re-written by the authors. They have incorporated all the new developments that have taken place since 1968 in both modal propositional logic and modal predicate logic, without sacrificing tha clarity of exposition and approachability that were essential features of their earlier works. The book takes readers from the most basic systems of modal propositional logic right up to systems of modal predicate with identity. It covers both technical developments such as completeness and incompleteness, and finite and infinite models, and their philosophical applications, especially in the area of modal predicate logic. Review "There has long been a need for a new version, and this is a superb new version. The new Hughes and Cresswell would clearly be the text of choice for introductory courses in modal logic. I expect this would be a standard reference in the subject for some years to come.." -Michael Byrd, University of Wisconsin-Madison "Written ... with great pedagogical skill, [An Introduction to Modal Logic] can be recommended to all those (especially without a solid mathematical background) who want to make the first acquaintance with the subject." -"Journal of Symbolic Logic "[T]his new presentation on modal logic provides a much-needed updating of the [authors' earlier]classic introduction which preserves all the virtues of the original, but responds to all the advances in modal logic which are appropriate to its introductory nature. It is the new classic introductory text on modal logic." -"Studia Logica About the Author M. J. Cresswell is Professor of Philosophy, Victoria University of Wellington.