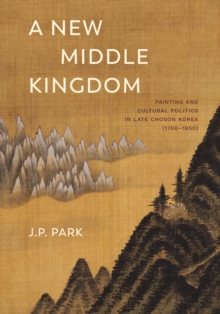 Historians have claimed that when social stability returned to Korea after devastating invasions by the Japanese and Manchus around the turn of the seventeenth century, the late Chos?n dynasty was a period of unprecedented economic and cultural renaissance, in which prosperity manifested itself in new programs and styles of visual art. A New Middle Kingdom questions this belief, claiming instead that true-view landscape and genre paintings were likely adopted to propagandize social harmony under Chos?n rule and to justify the status, wealth, and land grabs of the ruling class. This book also documents the popularity of art books from China and their misunderstanding by Koreans and, most controversially, Korean enthusiasm for artistic programs from Edo Japan, thus challenging academic stereotypes and nationalistic tendencies in the scholarship about the Chos?n period. As the first truly interdisciplinary study of Korean art, A New Middle Kingdom points to realities of late Chos?n society that its visual art seemed to hide and deny.