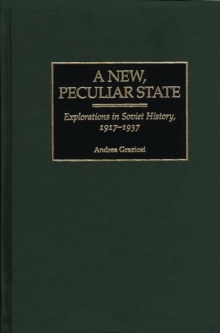 Using a variety of old and new archival sources to examine the emergence of the Soviet system (1917-1937), this combined approach offers chronologically coherent and original construction of some crucial stages and problems in Soviet history. The past two centuries have produced an extraordinary number of new states?more than 30 in 20th-century Europe alone. It is within this turbulent context that one must analyze the rise of the Soviet state, an entity that would prove fragile in the long run despite its all-powerful facade. An examination of the extreme features and peculiarities of the Soviet variant offers revealing insights into this exceptional historical process and contributes to a wider understanding of the European Forty Year War (1912-1953).

Graziosi devotes particular attention to Soviet solutions to the peasant and nationality problems, as well as to the pre-eminent role of ideology, the rise of personal despotism, and the unusual degree of penetration between state and economy. Using a variety of interpretations, he applies concepts from political, economic, and social history to the Soviet phenomenon without losing sight of its connections with more general European developments. The life of a Bolshevik leader is used to provide an overview of the whole period from six points of view: psychology, ideology, despotism, nationality, relations with the West, and economic building. Also, an analysis of industrialization based on the accounts of foreign workers who often met a tragic fate in the great purges contributes significantly to an assessment of the role that myth building played in the Stalinist repression of the Soviet working class.