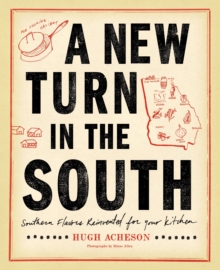 A NEW TURN IN THE SOUTH: SOUTHERN FLAVORS REINVENTED FOR YOUR KITCHEN: A COOKBOOK

Product Description When Hugh Acheson (now a James Beard Award winner as a chef and author) moved from Ottowa toÂ Georgia, who knew that he would woo his adopted home state and they would embrace him as one of their own? Â  In 2000, following French culinary training on both coasts, Hugh opened Five and Ten in Athens, a college town known for R.E.M., and the restaurant became a spotlight for his exciting interpretation of traditional Southern fare. Five and Ten became a favorite local haunt as well as a destinationâ€” Food & Wine named Hugh a â€œBest New Chefâ€ and at seventy miles away, the Atlanta Journal-Constitution named Five and Ten the best restaurant in Atlanta. Then came the five consecutive James Beard nominations. Now, after opening two more restaurants and a wine shop, Hugh is ready to share 120 recipes of his eclectic, bold, and sophisticated flavors, inspired by fresh ingredients. In A New Turn in the South, youâ€™ll find libations, seasonal vegetables that take a prominent role, salads and soups, his prized sides, and fish and meatsâ€”all of which turn Southern food on its head every step of the way. Hughâ€™s recipes include: Oysters on the Half Shell with Cane Vinegar and Chopped Mint Sauce, shucked and left in their bottom shells; Chanterelles on Toast with Mushrooms that soak up the flavor of rosemary, thyme, and lemon; Braised and Crisped Pork Belly with Citrus Saladâ€”succulent and inexpensive, but lavish; Yellow Grits with SautÃ©ed Shiitakes, Fried Eggs, and Salsa Rossaâ€”a stunning versatile condiment; Fried Chicken with Stewed Pickled Green Tomatoesâ€”his daughtersâ€™ favorite dish; and Lemon Chess Pies with Blackberry Compoteâ€”his go-to classic Southern pie with seasonal accompaniment. With surprising photography full of Hughâ€™s personality, and pages layered with his own quirky writing and sketches, he invites you into his community and his innovative world of foodâ€”to add new favorites to your repertoire. Amazon.com Review Sample Recipe from A New Turn in the South: Roasted Carrot and Beet Salad The beautiful beets and carrots harvested at the same time in the early fall by our local farm supplier inspired this recipe. Feta is a brined sheepâ€™s-milk or cowâ€™s-milk cheese made in many places, but the European Union recently mandated that only feta from Greece can be called â€œfetaâ€ so weâ€™ll start to see a bunch of â€œGreek-Style Salad Cheesesâ€ in grocery stores. My favorite feta, Valbreso, is from France, is 100 percent sheepâ€™s milk, and is for sale at Kroger in Athens, Georgia. If I can get it in Athens, chances are good your neighborhood grocer has it. If you live in a very isolated place, then order your feta from Amazon.com. Vinaigrettes need balance and should be made with the other salad components in mind. If you are dressing salty feta, scale back on the salt content in the dressing. Serves: 6 1 teaspoon salt 1 pound baby carrots, peeled, 1/2 inch of green top left on 1 pound baby beets, cleaned but not peeled 1/4 pound feta 1 tablespoon extra-virgin olive oil 1/4 cup Cumin Vinaigrette (recipe follows) 1 cup pulled fresh flat-leaf parsley leaves Preheat the oven to 450Â°F. Bring a large pot of water to a vigorous boil, add 1/2 teaspoon of the salt, then add the carrots. Blanch for 1 minute and remove to a bowl of ice water to stop the cooking. Once cool, remove and set aside. Place the beets in a large pot of cold water. Bring to a boil, add the remaining 1/2 teaspoon of salt, and simmer until the beets are tender. Strain the beets and peel them using paper towels to rub off the skin. This is easier when they are still warm. Crumble the feta and set aside. Toss the carrots with 1/2 tablespoon of the olive oil and place them on half of a rimmed baking sheet. Toss the beets with the remaining olive oil and place on the other half of the baking sheet. Roast for 15 minutes. Remove the beets and carrots from the oven and place in separate bowls. Add 1 tablespoon of the vinaigrette and 1/2 cup of the parsley to the beet